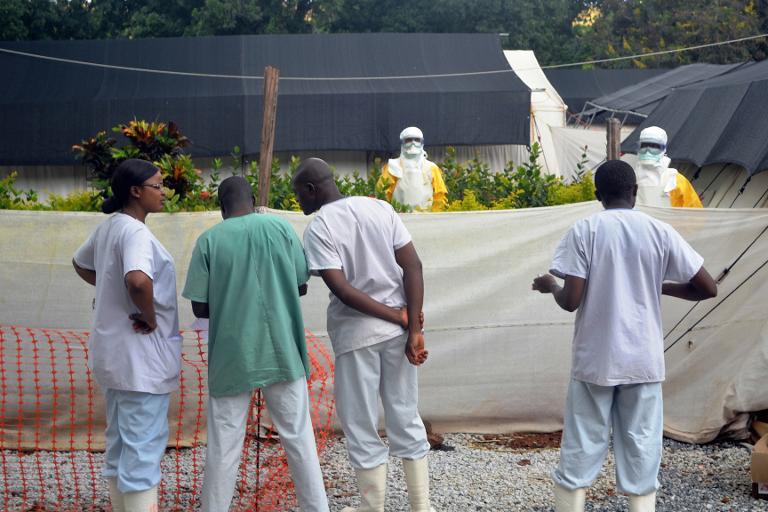 Nigeria said Friday that Ebola caused the death of a Liberian national who died in quarantine in Lagos, confirmation that the worst-ever outbreak of the virus has reached Africa’s most populous country.

Nigeria’s Health Minister Onyebuchi Chukwu told journalists that “thorough medical tests” had confirmed “the virus of Ebola” as the cause of death.

The 40-year-old, who died overnight, worked for the Liberian government and had travelled to Nigeria from Monrovia by air via Togo’s capital Lome.

His final destination was the southern city of Calabar where he was scheduled to attend a meeting organised by the west African bloc known as ECOWAS (Economic Community of West African States), the minister said.

Lagos government officials have previously said that he arrived at the city’s international airport on Sunday.

He was suffering from severe vomiting and diarrhoea upon arrival and was transported directly to hospital, according to the minister.

The patient “avoided contact with the general public” between the airport and the hospital and “there was no time for him to mingle in Lagos,” he added.

“All the passengers that the patient came in contact with have been traced and are being investigated,” in a bid to contain any spread of the virus across the city of more than 20 million people, Chukwu said.

The minister insisted that health officials had made direct contact with everyone on board the flight and were monitoring their conditions but offered no explanation as to how that was done.

The Liberian was flying on the Togo-based ASKY Airlines. African airlines typically do not require detailed contact information from passengers and it was not immediately clear how Nigeria had succeeded in tracing everyone on board.

As of July 20, the number of Ebola cases recorded in the months-long epidemic stood at 1,093, including more than 660 deaths, according to the World Health Organisation.

Lagos, the largest city in sub-Saharan Africa, poses challenges to health officials seeking to contain a spread of the virus.

The congested city has terrible sanitation and a poor health system, especially in public hospitals which are grossly under-funded, badly equipped and regularly do not have electricity.

Chukwu said ministry specialists had been deployed at all major ports — both sea and air — to screen anyone suffering from symptoms associated with Ebola.

Border officials have been put on “red alert,” he said.

Ebola is a form of haemorrhagic fever which can have a 90-percent fatality rate.

It can fell victims within days, causing severe fever and muscle pain, vomiting and diarrhoea — and in some cases, organ failure and unstoppable bleeding.

Ebola is believed to be carried by animals hunted for meat, notably bats.

It spreads among humans via bodily fluids including sweat, meaning you can get sick from simply touching an infected person.

With no vaccine, patients believed to have caught the virus must be isolated to prevent further contagion.

Ebola first emerged in 1976 in what is now the Democratic Republic of Congo, and is named after a river there.