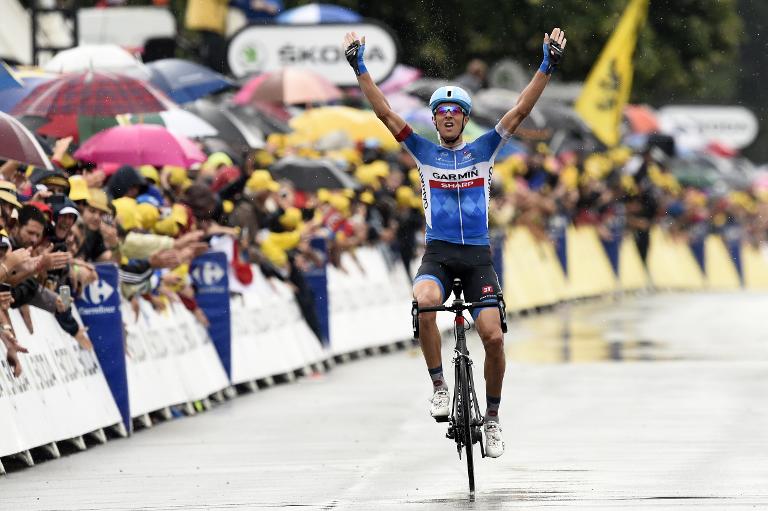 Ramunas Navardauskas won the 19th stage of the Tour de France on Friday and then admitted he wasn’t even supposed to be there.

The Lithuanian made history by becoming the first rider from his country to win a Tour stage but had it not been for Briton David Millar falling ill, he would not have actually ridden the Grand Boucle.

Millar was actually quite bitter about being dropped from the team for what would have been his 13th Tour and even posted a message on Twitter saying: “For the record, I was going to be ready for the Tour, so sad my team didn’t believe in me, after everything we’ve been through. Not cool.”

But Navardauskas said the 37-year-old Scot had been very supportive towards him.

“Dave had a bit of difficulty before the Tour de France. I don’t know what exactly but he was sick a little bit,” said the 26-year-old.

“The team decided it was better to start with a healthy team but even then we got some sick riders because the first week was really wet and cold.

“But before the Tour de France I got a really nice email from Dave saying ‘if someone had to take my place in the Tour team I’m happy it’s you’ and asking for me to take a victory for him.

“I managed it so both me and Dave are happy. I’m happy to be in this team and for this victory. If Dave could have been here he could have done something similar but it is how it is, c’est la vie.”

Behind Navardauskas, German John Degenkolb won the sprint finish for second on the stage, seven seconds back, with Norway’s Alexander Kristoff, a winner already of two stages this Tour, third.

But the sprint was hampered by a crash in the final 3km that held up many riders, including race leader Vincenzo Nibali.

Even so, the 29-year-old Italian maintained his 7min 10sec lead over Frenchman Thibaut Pinot in second.

With only Saturday’s 54km time trial left in which to make any time gains, Nibali is almost certain to win the 2014 Tour.

But he insisted he wouldn’t be taking things easy on Saturday to ensure he doesn’t risk his victory by crashing.

“Tomorrow it’s not a case of there being many risks and I have lots of time in hand,” he said.

“But I want to honour the jersey, my team, the Tour and everyone. It’s important to try to do well and I will ride the way the leader of the Tour should.”

The real race on Saturday will be for a podium finish with 24-year-old Pinot holding a slender advantage over veterans Jean-Christophe Peraud and Alejandro Valverde.

The former has won the French national time trial championships while the latter is the current Spanish champion in the race against the clock.

“I hope no-one will come and get me, it won’t be easy but I’ve got good legs and I hope to have no regrets,” he said.

“The strongest two out of the three of us will be on the podium and I hope to be at my best to be there.

“Everyone is tired, this morning I was tired but the legs are fine, I’m serene, I know I can be caught tomorrow but that’s the game.”

Peraud could have seen his time trial hopes compromised as he was taken down by the spill, but he said he had emerged unscathed.

“I was caught up in the fall, I tried but I couldn’t avoid it,” he said.

“With the rain that fell all day long and the slippery roads, it’s the kind of day we prefer to avoid.

“But I don’t think that will have any baring on the time trial.”