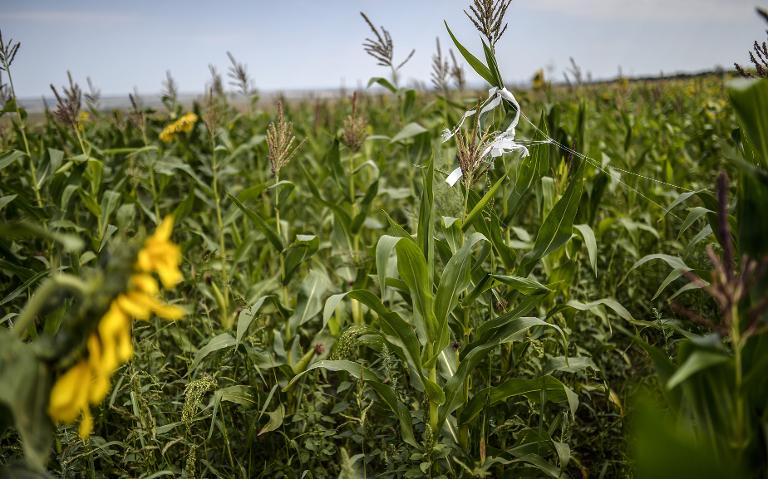 A strip of white bandage on a stick in a sunflower field marked the spot where the remains of one of the 298 victims of downed Malaysian flight MH17 lay in the sun on Friday more than a week after the crash.

Combine harvesters cut down the wheat in surrounding fields in a semblance of normality at the gruesome scene — some of them skirting pieces of the wreckage.

The remains were among several seen in recent days as dozens of the victims are still unaccounted for and Australia and the Netherlands prepare to deploy police and troops to secure the sprawling site in rebel-held eastern Ukraine.

Australian and Dutch officials accompanied a team of monitors from the Organisation for Security and Co-operation in Europe to examine the wreckage and get ready for the deployment by mapping the territory.

“They’re doing GPS coordinates,” Michael Bociurkiw, a spokesman for the OSCE’s special monitoring mission to Ukraine, said next to the scorched earth at the main crash scene near the village of Grabove.

Artillery booming in the distance echoed across the rolling hills — a stark reminder of the fighting raging just a few dozen kilometres away outside the ceasefire zone declared by both Ukraine’s army and separatists around the crash site.

As negotiations continued over how Australian and Dutch officers could be deployed, villagers said they welcomed the prospect of foreign police and inspectors coming to carry out a proper investigation.

“They can come and live here if they want!” said Galyna Nemenko, a 51-year-old housewife in the tumbledown village of Petropavlivka, as the inspectors swept past in their muddy white Land Cruisers.

Nemenko was in a huddle of local residents discussing the incredible incident in a normally peaceful slice of countryside with potholed roads and illegal coal mines.

“As long as the inspectors are here, there’ll be no fighting!” one woman said.

On a swing outside her cottage, 16-year-old Tetyana Grybova also welcomed the prospect.

“I think they should guard the site,” she said.

Debris from the crash that flew into people’s gardens had been left by the side of the road around her — including clothes, oxygen masks and bits of fuselage.

At the one-room library, another group gathered as the OSCE monitors drove past.

“Our land, our roads are open to everyone,” said the director Svetlana Korotysh, 53.

“We’re not bothered about all the foreigners coming here. We also need to know the truth,” she said.

The experts on Friday were seen examining the wreckage at three main sites in and around the villages of Grabove, Petropavlivka and Rozsypne, appearing to show particular interest in parts of the wreckage that had shrapnel-like lacerations.

The circumstances are as yet unexplained but the plane appears to have been shot down by a surface-to-air missile, which the United States has accused Russia of providing to the rebels.

Dutch authorities said some 227 bodies have been accounted for, suggesting that those of 71 victims have not been recovered.

With no recovery efforts seen at the site on Friday, the International Committee of the Red Cross issued a statement urging “the need to act quickly and follow proper procedures in searching for, collecting, managing and identifying the remains of those who died”.

The OSCE monitors said they had also noticed personal objects of passengers including credit cards and passports that were not there before suddenly reappear.

A group of rebels in uniforms from the now-disbanded Ukrainian interior ministry special forces unit Berkut, accompanied the monitors in a symbolic show of force as the site is normally not under guard.

All the gunmen were wielding Kalashnikovs and one of them carried a surface-to-air missile slung across his shoulder — a shoulder-fired model not like the one allegedly used to down the plane.

Asked about the possible arrival of foreign officers, one local man fixing his motorbike reacted with disbelief: “What? Australia and Holland? Really? Why do they need to come here? What is there to guard?”