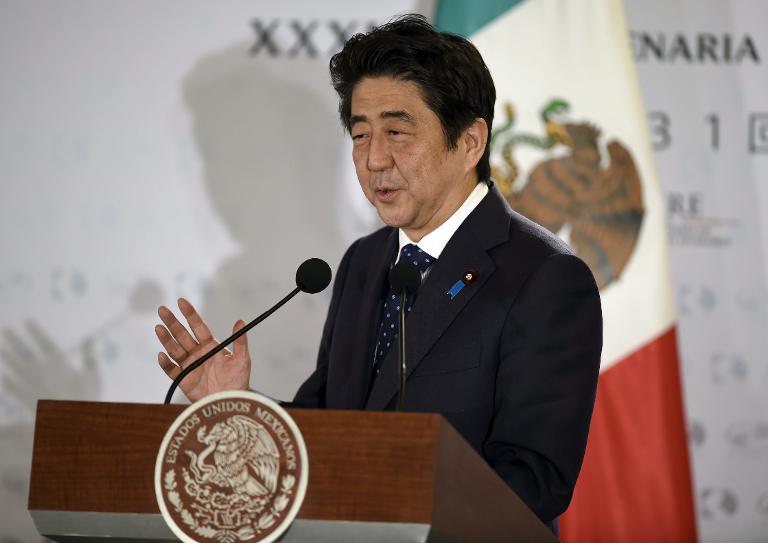 Abe, whose visit to the region comes on the heels of Chinese President Xi Jinping’s, met Pena Nieto at the presidential palace for talks that ended with the signing of a raft of deals.

The new agreements included one between Mexican state oil firm Pemex and Japan’s development bank, and another between Pemex and the Japan Oil, Gas and Metals National Corporation.

With Japan on the lookout for new power sources after the Fukushima disaster forced the shutdown of its nuclear reactors, energy is high on the prime minister’s agenda for the trip.

Mexico is undergoing sweeping changes in its energy sector, with Congress poised to end struggling Pemex’s 75-year monopoly and open up the oil and gas sectors to foreign investment.

The two leaders, both elected in 2012, took turns praising each other for the reforms they have implemented.

Pena Nieto hailed the “bold transformations” of Abe’s fiscal stimulus and monetary easing programs, while Abe drew parallels between their leadership styles, saying both saw reform as a growth strategy.

Traveling with a delegation of Japanese executives and his wife Akie, Abe received a red-carpet greeting at Mexico City airport from Foreign Minister Jose Antonio Meade.

Pena Nieto and first lady Angelica Rivera then threw a welcome ceremony for them at the presidential palace.

Kenko Sone, an official traveling with Abe, mentioned the “special interest” of Japanese companies in Mexico’s shale gas, though he said there were no firm investment plans yet.

Sone said that it would be cheaper for Japan to import gas from Mexico than from the United states. The American gas Japan currently buys comes from the eastern United States, and must be shipped through the busy Panama Canal.

Japan is Mexico’s fourth trade partner, with total trade of $19.3 billion last year. There are some 800 Japanese companies that have investments in Mexico, especially automobile giants like Nissan, Mazda and Honda.

Abe is the first Japanese leader to visit Mexico since Prime Minister Junichiro Koizumi in 2004.

Abe’s nine-day trip — which will also take him to Trinidad and Tobago, Colombia, Chile and Brazil — comes two days after China’s Xi wrapped up his own four-country tour.

The interest of the rival powers underlines Asia’s growing interest in the region’s fast-growing economies and vast natural resources.

Japan, long one of the world’s top exporting countries, has registered two consecutive years of trade deficits since the March 2011 earthquake and tsunami triggered the Fukushima disaster.

With its emerging economies, Latin America holds promise as a relatively untapped market for Japanese exports, in addition to its coveted raw materials.

But Japan is not the only one showing growing interest in the region often considered the United States’ back yard.

The back-to-back Chinese and Japanese visits come at a moment when territorial disputes between the Asian rivals have pushed their relations to a low point.

China’s Xi headed home from his own trip to Brazil, Argentina, Venezuela and Cuba with dozens of deals in areas from oil to mining to agriculture.

Xi and Putin, who overlapped in Brazil, played to Latin American resentment toward perceived dominance of the region by Japan’s longtime ally the United States.

Together with Brazil, India and South Africa — their partners in the BRICS group of emerging nations — they announced a new $50 billion development bank and $100 billion reserve fund to rival the Western-dominated World Bank and International Monetary Fund.