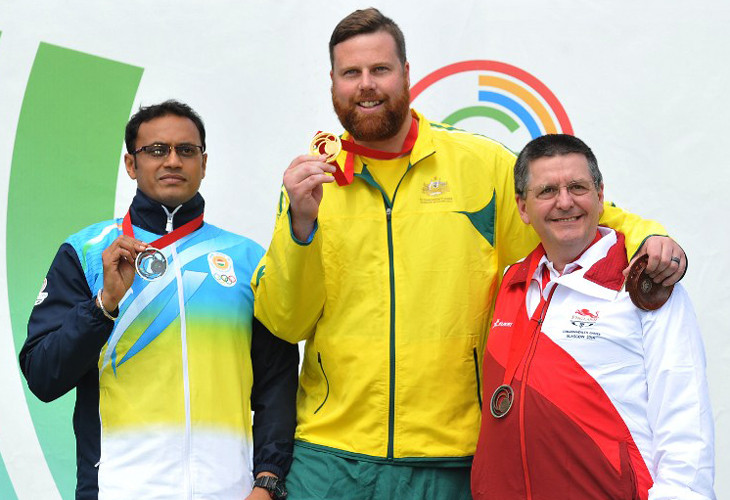 Glasgow: A horrendous shot midway into the final round competition cost Indiaâ€™s Prakash Nanjappa a gold as he finished a heart-breaking second in menâ€™s 10m Air Pistol to give India their third medal in the shooting event at the Commonwealth Games on Saturday.

Nanjappa, who won a bronze in the ISSF World Cup in South Korea last year, was leading at the end of the second series of the elimination stage but he apparently lost concentration and shot a disappointing 7.7 to hand the lead to eventual winner Daniel Repacholi of Australia.

Despite the setback in the sixth shot of the elimination stage, the 38-year-old Banglorean tried his best to catch up with the Australian but failed to do so in the end and had to settle with a silver at the Barry Buddon Shooting Centre at Dundee near here.

Repacholi won the gold with a total of 199.5 while Prakash scored 198.2. Englandâ€™s 60-year-old Michel Gault got the bronze.

Nanjappa, who topped the qualification round, was seen ruffled by that mistake and he was taking deep breaths in between the shots. A team member later said Prakash felt time constraint and that was why the grip over his pistol was not proper when he shot 7.7.

Before the last round, Repacholi had taken a lead of 1.4 points but he could only come up with a 9.3 in the penultimate shot and Prakash could have narrowed down the gap. The Indian could not do that as he also shot a 9.3 at a crucial juncture.

Prakash was the first to fire the last shot and he came up with a 10.5, putting pressure on his Australian opponent. But Repacholi fired a 10.4 to run away with the gold.

The other Indian in the fray, Om Prakash had failed to qualify for the final round.