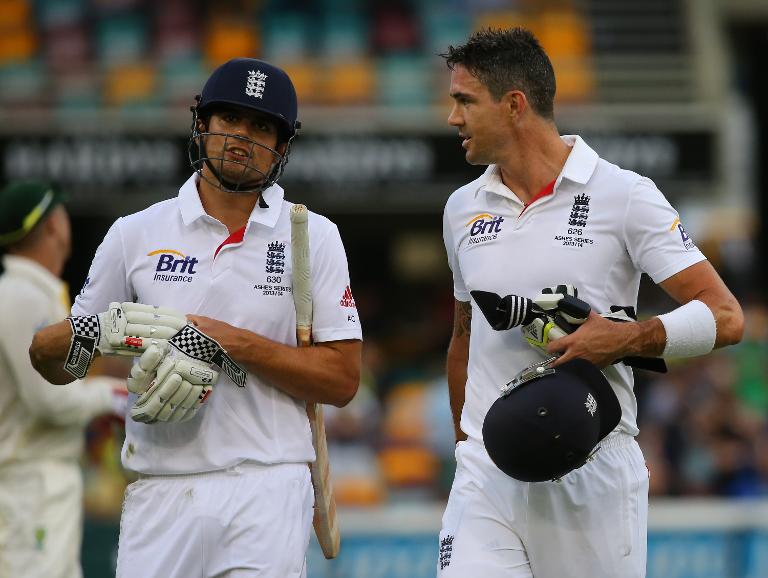 Alastair Cook shrugged off calls from Kevin Pietersen to resign as England captain ahead of the third Test against India at Southampton.

Pietersen used his Daily Telegraph column published Saturday to say he was only still in the job because it would be “yet another PR disaster” for the England and Wales Cricket Board to sack him now.

Cook has faced repeated calls to resign the captaincy from the likes of Michael Vaughan and Nasser Hussain during a run that has seen England go 10 Tests without a win.

Meanwhile Cook’s form with the bat has also declined.

It is now 27 innings since he scored the last of his England record 25 Test hundreds, and the left-handed opener’s last nine Test innings have yielded just 129 runs.

But Cook speaking at Southampton, where England will start Sunday’s match 1-0 down in the five-Test series, following India’s 95-run win at Lord’s on Monday, insisted once again he would not resign.

“The last three or four weeks, everyone’s been saying that. It is no different who else says it,” Cook told reporters at Southampton on Saturday when asked about Pietersen’s comments.

“I’ve just got to stay true to myself and say how good it would be if I could get through this as a person, as a player, as a leader and take huge strides from it,” the 29-year-old added.

“I’m desperate to carry on because I love being England captain, it’s a huge honour.

“I said when I first took over ‘I just want to throw everything into it’ and until that time where I don’t feel as if I can carry on doing it or someone taps me on the shoulder then that’s what I’m going to to do.”

If England lose the third Test, they will be unable to win the series against India, having already been beaten 1-0 in a two-Test contest this season at home to Sri Lanka.

Not since 2001, when they drew with Pakistan and lost to Australia, have England failed to win either of their series in a home season.

“The good news in a five Test match series is you’ve got a chance to bounce back.”

“The frustrating thing has been that we’ve been getting ourselves into situations, especially in the four Test matches where we’ve been ahead of the game by quite a long way and haven’t been able to force that result.

“It’s bubbling under but the longer it goes without a win, it becomes harder and harder.”

Pietersen, despite being England’s all-time leading run scorer and their top contributor with the bat during their 5-0 Ashes thrashing in Australia, was the only player to be axed by England after their return home in February.

At the time, the ECB cited the need to support Cook’s captaincy as a reason for ditching Pietersen.

And South Africa-born Pietersen said “At the moment only politics are keeping Cook in a job because the England and Wales Cricket Board backed him so much that it would be yet another PR disaster if it sacked him now.

“But the ECB needs his runs back more than anything else so a big decision has to be made,” he added.

“He (Cook) should do what is right for England and resign the captaincy. He has shown he does not have the tactical brain to lead the side,” Pietersen insisted.

“England badly miss Cook the opening batsman scoring 150 to set games up at the top of the order and, relieved of the captaincy, I don’t think it is too late for him to rediscover this form.”

Pietersen urged Cook to seek advice from one of the many former England players now working as a television pundit.

“How many ex-international players have England had recently working with them? None.

“There is so much knowledge in English cricket going to waste.”