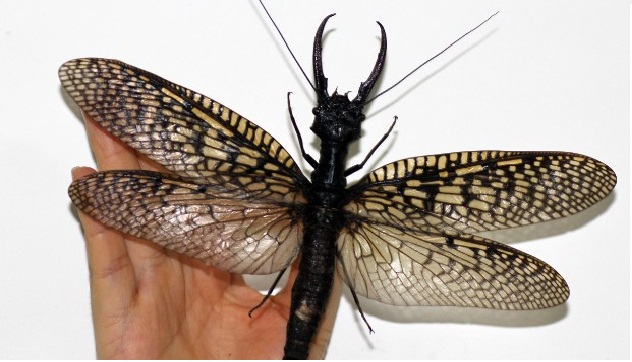 China : Researchers from Sichuan, China have found the most frightening looking insect ever. The Insect Museum of West China acquired the insect, which turned out to be Dobsonflies, from villagers on the outskirts of Chengdu. The largest insect had a wingspan of 8.27 inches and pincers roughly the size of a human pinkie finger.

Museum staff, who measured the insects, believes them to be the largest aquatic bugs in the world. The previous record-holder, with a wingspan of 7.5 inches, was a South American Damselfly.

Large enough to cover the face of a human adult, this scary-looking insect is also known among entomologists as an indicator of water quality, says the museum.

The giant dobsonfly makes its home in bodies of clean water and is highly sensitive to any changes in the waterâ€™s pH as well as the presence of trace elements of pollutants. If the water is slightly contaminated, the giant dobsonfly will move on to seek cleaner waters.

The adult insects lay their eggs in water, and larvae grow up in and around sediment at the bottom, and then as adults emerge from the depths to become, basically, flying jaws.

A Dobsonfly is any insect of the subfamily Corydalinae, part of the megalopteran family Corydalidae. There are over 220 species of Dobsonflies. The insect can be found in other provinces in China, India’s Assam state, and in northern Vietnam. This is the first time it has appeared in Sichuan province.