Home World US airlines others resume flights to Israel 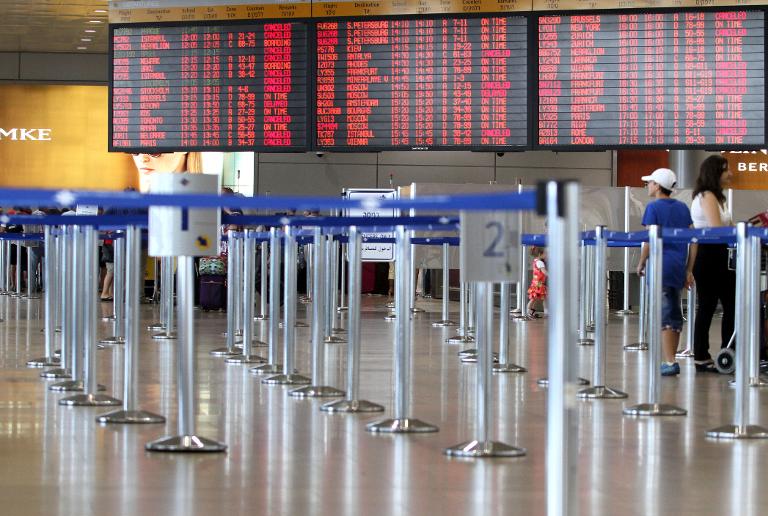 American, Russian and some European carriers resumed flights to Israel Thursday after a two-day freeze amid fears that rocket fire from Gaza was endangering commercial air traffic into Tel Aviv.

But some European airlines continued to suspend their flights, out of security concerns around Ben Gurion International Airport.

Officials in Washington lifted a formal ban on American flights to Israel late Wednesday, and flights by carriers Delta, United and US Airways, as well as Air Canada, were scheduled on Thursday.

“We have consulted extensively with the US government, as well as our own people on the ground in Tel Aviv… and we believe it’s safe to fly and that’s why we’re recommencing our flights,” a United Airlines spokesperson said.

But the Federal Aviation Administration, while lifting its ban, warned of a “very fluid situation” amid intense fighting in the Gaza Strip that has left nearly 800 Palestinians dead.

The European Aviation Safety Agency lifted its own recommendation for airlines to stop flights to Tel Aviv, saying it had revised its Wednesday decision “on the basis of information provided by the Civil Aviation Authority of Israel and following coordination with the (FAA).”

Iberia, Alitalia and SAS were among the European airlines resuming Israel service, while British Airways has operated its Israel routes uninterrupted.

Russia’s second-largest airline Transaero said it was resuming flights to Israel Thursday, two days after suspending traffic along with other major airlines over the security concerns.

Previous conflicts in Gaza, which is under assault by Israeli forces trying to halt Palestinian rocket fire, have not endangered civilian flights in Israeli airspace.

But after a Hamas rocket struck a neighborhood to the north of Ben Gurion airport, aviation agencies recommended a suspension of flights while the risk was assessed.

The cancellations highlighted increased fears for passenger aviation in the wake of last week’s downing of a Malaysia Airlines Boeing 777 over Ukraine that killed all 298 people on board.

Even as European and American authorities gave the green light for resumption of flights to Israel, the Association of European Airlines called for an “urgent” debate on airspace security guidelines after the Malaysia Airlines tragedy.

US intelligence officials say the passenger jet was shot down by a surface-to-air missile, allegedly fired by pro-Russian rebels in a separatist-controlled area of eastern Ukraine.

In addition to the crises in Ukraine and Israel, other recent aviation tragedies have set the commercial airlines industry on edge, notably the crash of a Taiwanese turboprop plane during stormy weather Wednesday that killed 48 people, and the crash of an Air Algerie plane Thursday in Mali with 116 people aboard.

Air France told AFP Thursday it was maintaining its suspension of flights to Israel “until further notice,” saying the Directorate General of Civil Aviation had yet to lift its recommendation.

Germany’s largest carrier Lufthansa said it was extending its freeze on flights to Israel through Thursday, as was Swiss Air.

“SWISS and Lufthansa Group suspend flight operations to and from Tel Aviv for a further 24 hours,” Swiss Air said on Twitter at 1800 GMT Thursday.

Austrian Airlines, which carries up to 700 passengers between Vienna and Tel Aviv every day, said it was cancelling its Israel flights through at least Friday.

While the rocket attack near Israel’s main airport raised fears that a commercial flight could be struck, US Secretary State John Kerry, who is trying to broker a ceasefire in Gaza, did land in Israel on Wednesday, and the State Department said his team was “very comfortable” despite the rocket threat.

Meanwhile, Israeli flag carrier El Al declared that it was business as usual.

“Due to the cancellations of flights to and from Israel by various airline companies, we would like to update that EL AL, as always, continue to fly regularly,” the airline told travellers.