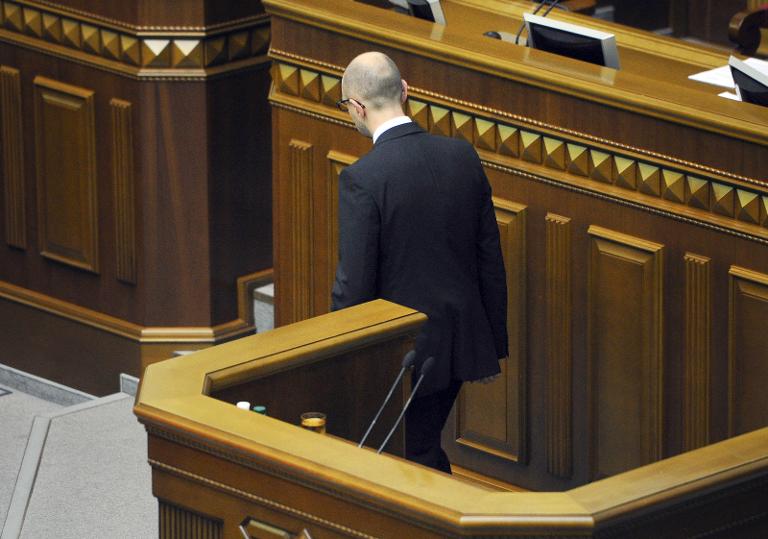 Ukraine’s prime minister resigned after his governing coalition collapsed, plunging the former Soviet state into political limbo as it struggles to quell a deadly rebellion in the east.

The shock announcement Thursday added to an already chaotic situation in the rebel-controlled east, where international experts are carrying out a complex investigation into last week’s downing of Malaysia Airlines flight MH17 that left 298 dead.

And the gravity of the situation facing the country was underscored by allegations from Washington that the US has evidence Russian troops are firing artillery on Ukrainian military positions from Russian soil.

Prime Minister Arseniy Yatsenyuk said he was stepping down over the “dissolution of the parliamentary coalition and the blocking of government initiatives” after several parties walked out on the ruling group.

The collapse of the ruling coalition paves the way for early elections to be called by President Petro Poroshenko within 30 days.

Although a truce has been declared by both rebels and government forces in the immediate vicinity of the vast crash site, heavy shelling was ongoing nearby including around Donetsk, just 60 kilometres (40 miles) from the scene.

Ukraine’s army reported four soldiers killed over the last 24 hours in its offensive to retake the eastern industrial heartland from pro-Russian insurgents.

Countries which lost 298 citizens in the disaster are looking to deploy armed police to secure the impact zone, with Dutch Prime Minister Mark Rutte announcing the Netherlands was sending 40 unarmed police to the crash site.

“On the site it is still clear that nothing is happening without the approval of the armed rebels who brought the plane down in the first place,” said Australian Prime Minister Tony Abbott, whose country lost 28 citizens in the crash.

“There has still not been anything like a thorough professional search of the area where the plane went down, and there can’t be while the site is controlled by armed men with vested interest in the outcome of the investigation.”

Abbott has placed 50 Australian officers on stand-by in London.

The Ukrainian military said rockets were on Thursday being fired “from the Russian side”, hitting locations close to Lugansk airport and in several areas in the Donetsk region.

Mortar shells also rained down on Avdiyika in the Donetsk region, the army said, without giving details of casualties.

An AFP crew heading to one of these combat hotspots Wednesday was turned back by rebels, who fired shots at their car.

Kiev said two fighter jets that were downed on Wednesday were hit by missiles launched from Russian territory, and that while the pilots ejected safely, there was no information about their whereabouts.

Meanwhile, the Red Cross warned both sides to abide by the Geneva Conventions, declaring that it considered Ukraine to be in a state of civil war.

– EU to put more under sanctions –

The EU, which accuses Russia of fanning the rebellion in Ukraine’s east by arming the separatists, will add 15 Ukrainian and Russian individuals and 18 entities to its sanctions list, said a source from the bloc.

The move came just a week after the EU unveiled a round of toughened embargoes against Moscow, which is widely expected to sink into recession this year.

In the debate over more sanctions, Britain ruffled feathers in neighbouring France over its push for an EU arms embargo, as Paris is keen to go ahead with its sale of two warships to Russia.

On Thursday, Poroshenko said he was “very disappointed” at France’s insistence on the deal, saying: “It’s not a question of money, industry or jobs. It’s a question of values.”

US intelligence officials have said they believe the rebels mistakenly shot down the Malaysia Airlines flight from Amsterdam to Kuala Lumpur with a surface-to-air missile provided by Russia.

Moscow has denied the charges and Putin has pledged to “do everything” to influence the separatists and ensure a full probe into the crash.

Russia has continued a troop build-up near the Ukraine border and kept up deliveries of arms and equipment to separatists since the downing of the Malaysian airliner, US defence officials told AFP, without confirming that Russian troops were firing on Ukrainian positions.

The first bodies from the crash arrived in the Netherlands on Wednesday to a solemn ceremony. Dozens more were flown there on Thursday to undergo an identification process that Rutte has warned could take months.

Dutch police have also been visiting bereaved relatives of the victims to retrieve DNA samples from items such as hairbrushes, and obtain details of tattoos and fingerprints, as well as consulting medical and dental records to help with the identification.

And Human Rights Watch urged Kiev to stop using unguided Grad rockets which it said have killed at least 16 civilians in four recent attacks, warning that firing such weapons at populated areas could amount to war crimes.

The rights group said that both government forces and pro-Russian rebels have used Grads — unguided rockets fired in salvos and sprayed across a wide area.