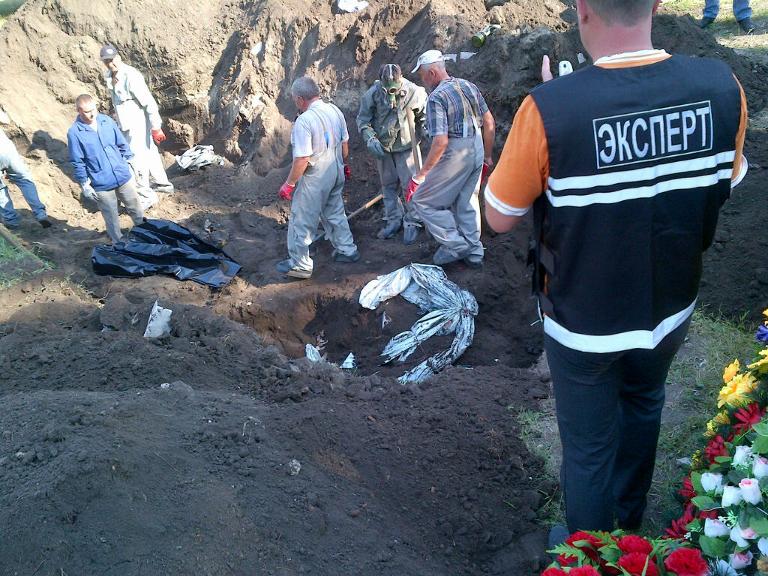 Three hours after the digging began, a piece of white sackcloth was seen in the soil.

A few minutes later, four bodies were being recovered from the hole.

The city of Slavyansk in eastern Ukraine — a former rebel stronghold back under Ukrainian military control — had found its first mass grave.

Everyone looked on, save one man — the brother of one of the dozens who went missing. He sat on a stone wall with his back to the scene.

Municipal workers dug up the three-metre (10-foot) deep hole with an excavator in an area near the town centre, then climbed in to recover the bodies.

“This is a terrible tragedy,” said Anton Gerashchenko, a Ukrainian interior ministry adviser presiding at a brief ceremony for townspeople before the exhumation began.

“In this mass grave are the bodies of four Protestant parishioners, innocents who were tortured and killed by the rebels,” he said.

Wreaths and portraits of the four men believed to be the victims had been laid out by the gravesite with heartbreaking notes: “To our dear Viktor, from your children and family”, “To our dear brother Dima, Lisa and the children”, “To our husband and brother”.

The men were kidnapped on June 8 as they came out from Sunday worship, and were never seen again. All four were married. One had four children, while another had eight.

“There are likely around 20 bodies in this mass grave. As well as the four men who were tortured, we think there are the bodies of terrorists who died in the battle for Slavyansk against the Ukrainian army,” Gerashchenko said.

A town of 100,000 people north of Donetsk, Slayvansk was recaptured by the Ukrainian army earlier this month.

“All the people around this area saw the rebels burying people here. That’s why we knew of its existence,” Gerashchenko said.

“We know there are others in the town but we don’t know where. This is the first one that we’re excavating,” he added.

A bystander, Valentina, who lives nearby, said: “I was outside my house on June 11, when a truck came and made the hole in the morning.

“After 3 pm two vehicles came close to the hole and threw some corpses inside.

“The bodies were wrapped in a white cloth but there was no coffin,” she said, as two snipers surveyed the scene from a nearby rooftop above her.

“How can we go on after this?” she added. “We are normally a peaceful people!”

On nearby Lenin Square, dozens of local residents came to watch as the Ukrainian flag was raised over the town hall and the Ukrainian anthem was sung.

The town employees sang along, hands on their hearts and tears in their eyes.