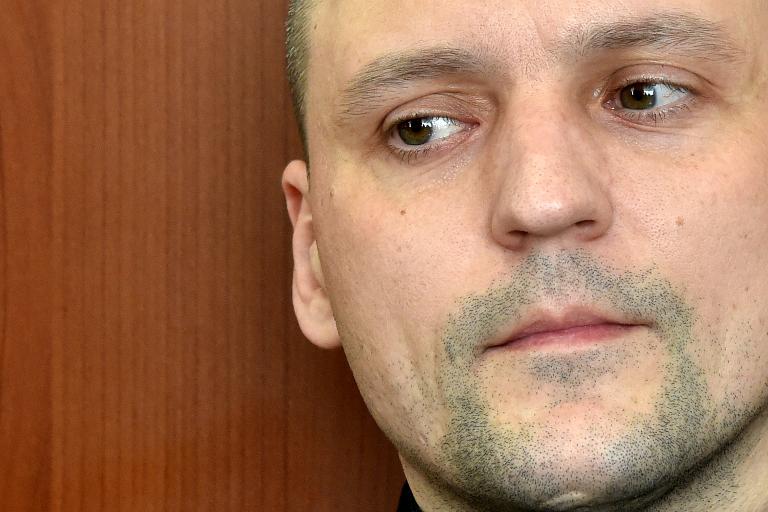 A Russian court on Thursday jailed a radical opposition leader Sergei Udaltsov to four and a half years for organising “mass riots” ahead of Vladimir Putin’s inauguration as president in 2012.

Judge Alexander Zamashnyuk sentenced both Udaltsov and his political ally Leonid Razvozzhayev to four and a half years in a corrective labour camp for organising a rally against Putin and plotting further unrest.

The judge said the men had organised “mass riots accompanied by violence against the authorities and damage to property.”

Udaltsov, the shaven leader of a banned radical leftist group, rose to prominence as part of the protest movement against Putin’s return to the Kremlin for a third term.

He responded to the verdict by declaring a hunger strike, his lawyer said after the verdict.

“Udaltsov said it was a political reprisal and declared a hunger strike,” his lawyer Nikolai Polozov told journalists.

Udaltsov has held numerous hunger strikes in recent years in protest at his convictions over protests and has been hospitalised several times.

Prosecutors had asked for eight-year sentences for both men.

“We were prepared for worse, much worse. This is a compromise,” Udaltsov’s other lawyer Dmitry Agranovsky told AFP.

Udaltsov reacted calmly as court officials snapped handcuffs on his wrists, saying “This is not a court” and “Shame!” while his supporters in the courtroom shouted “Freedom to political prisoners!”

Udaltsov, 37, was one of the more radical opposition leaders during the wave of mass rallies against Vladimir Putin which swept Moscow in 2011 and 2012.

He was put under house arrest in February 2013 after being charged with fomenting mass disorder and accused of attempting to overthrow the government.

His co-defendant Razvozzhayev, 41, was an aide to a Russian opposition lawmaker. He was put under pre-trial arrest in October 2012, having accused Russia’s security services of abducting him from Ukraine where he was applying for asylum, and smuggling him back across the border.

At the mass rally in Moscow on May 6, 2012 tens of thousands of people marched in protest against Putin’s inauguration to a historic third presidential term, only to clash with police cordons around Bolotnaya square near the Kremlin.

Human rights organisations have protested the charges as disproportionate and said that police provoked the clashes by blocking the path of the crowd.

The so-called Bolotnaya probe has already seen seven protesters sentenced to prison terms of up to four years for participating in the unrest.

The probe against Udaltsov is based on a film broadcast on a Russian TV channel which alleged that he planned an uprising funded by a Georgian lawmaker.

Udaltsov proclaimed his innocence again in an interview published Thursday in the daily Moskovsky Komsomolets, saying he did not know the Georgian lawmaker and that the film had been fabricated.

Both men sat in a glass cage in the courtroom — where defendants are often placed in Russian courtrooms — flashing peace signs. Udaltsov brought a large duffel bag of his belongings, showing he expected a jail sentence.

With tensions running high, the judge ordered some people out of the court after several emotional outbursts.

The Kremlin in recent months has severely tightened its control over dissenting voices in Russia, restricting even further the rights of protesters and hiking penalties for unauthorised gatherings to five years for repeat offenders.

Popular bloggers will soon have to register with the authorities and another law against “extremist” language could see Russians go to jail for up to five years for retweeting “offensive” information.