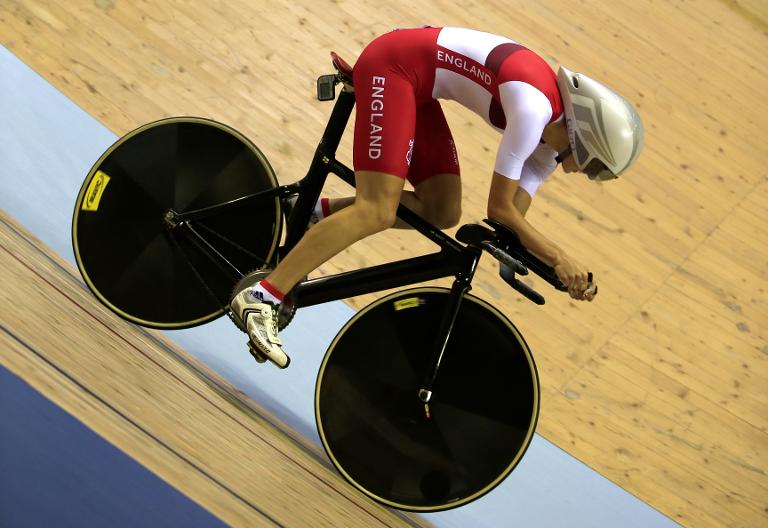 England’s Joanna Rowsell is on track to add Commonwealth Gold to her world title on Friday after she cruised into the final of the women’s 3000m individual pursuit on the second day of track cycling at the Sir Chris Hoy Velodrome.

Rowsell, who was crowned world champion in Colombia earlier this year, set a new Commonwealth record in qualifying as she took more than a second off the previous record, set by Katie Mactier at the 2006 Melbourne Games, crossing the line in three minutes 29.038 seconds.

The 25-year-old will battle it out with Annette Edmondson, whose brother Alex was part of the Australian quartet who claimed gold in the men’s team pursuit, for the gold medal after the Australian came close to breaking the Commonwealth record herself.

The host nation Scotland will be cheering on Katie Archibald as she takes on Australia’s Amy Cure for the bronze medal after setting a Scottish record in qualifying.

England’s Laura Trott, who won gold as part of Team GB in the team pursuit in London 2012 and at this year’s world championships along with Rowsell, was edged out into sixth place.

Trott will get a further chance to try and claim her first ever Commonwealth Games medal when she competes in the women’s 10km Scratch Race on Saturday.

Her boyfriend, sprint king Jason Kenny, will compete in the semi-finals of the men’s Sprint event after a good performance in the quarter-finals.

The Olympic champion had needed a first round repechage to make it through to the last eight but he showed the kind of tactical skill that won him Olympic gold in London 2012 to see off up-and-coming Australian Matthew Glaetzer, who had set a new Commonwealth record in qualifying.

The English star, who claimed a silver in the team sprint on Thursday, defeated Glaetzer with a 2-0 win in the best of three heats, including a thrilling photo finish in the second race.

In the semi-final he will face Australia’s Peter Lewis who defeated Matthew Archibald of New Zealand 2-0 in their quarter-final.

The other semi-final is an all New Zealand affair between Eddie Dawkins and Sam Webster, both part of the Kiwi trio who set a new Commonwealth record on their way to gold in the team sprint final.

Dawkins easily saw off England’s Matthew Crampton with a comfortable 2-0 win while Webster qualified for the final four with a 2-0 defeat of Malaysia’s Azizul Awang.

Reigning Commonwealth champion and world record holder, Jack Bobridge, will get the chance to retain his men’s 4000m individual pursuit title as he powered into the final with the fastest qualifying time.

He will take on fellow Australian and current world champion Alex Edmondson, who is looking for his second gold of the Games.

The bronze medal will be contested between New Zealand veteran Marc Ryan, who won bronze at the World Championships in Colombia, and Owain Doull from Wales.