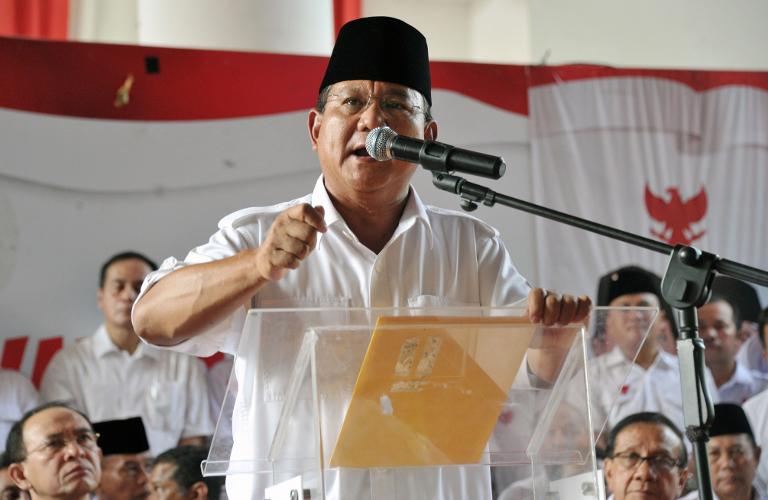 Prabowo Subianto claims that massive fraud tipped the scales in Widodo’s favour, but his challenge is directed at the elections commission, in part for failing to investigate all allegations of cheating, according to a spokesman.

“We are now taking the legal path, the constitutional path,” Prabowo told hundreds of supporters on the street outside the court.

“We have almost one million documents and 52,000 witnesses,” he said.

Prabowo has refused to concede defeat despite the elections commission’s declaration Tuesday that Widodo won the presidency with 53 percent of the vote in the world’s third-biggest democracy.

He is seeking a repeal of the commission’s results and declaration of Widodo as president, Prabowo’s coalition spokesman Tantowi Yahya told local television.

The former general, who has admitted to ordering the abduction of activists before the Suharto dictatorship fell in 1998, angrily announced his withdrawal from the election Tuesday, only to say Wednesday that he would file an appeal.

Both candidates claimed victory on the election day, leaving Indonesians waiting two weeks for the official vote count to confirm a winner.

The challenge means an even longer drawn-out process, with court officials saying the decision will be delivered by August 21.

Supporters outside the court held banners demanding a revote and vowing “revolution” if his challenge fails.

“We won’t let this country be led by the other camp. They will allow foreign intervention and communism,” one protestor shouted to supporters, echoing comments made by Prabowo and his spokesmen during the campaign period.

Analysts have described the July 9 election as free and fair, calling it the most transparent in Indonesia’s history.

For the first time, the election commission posted online the voting tally sheets from all polling stations across the country, which make up nearly half a million forms.

Votes were counted at the polls one by one in front of witnesses from both coalitions, as well as community members, and tallied on a sheet visible to all.

Widodo’s team could not be immediately contacted but told AFP earlier they were not concerned about the challenge.

Widodo is moving ahead with presidential preparations, commenting to reporters on Friday about his future cabinet.

The two previous presidential elections, in 2004 and 2009, were also challenged at the court but were thrown out quickly on lack of evidence.

Concerns of impartiality in the court have been raised following the life sentence handed to its former chief justice last month for accepting bribes to fix local election disputes.

But the court is under immense pressure to rule fairly as it tries to restore its image following the scandal.

Widodo is the first elected president with no ties to the political or military elite.

The former furniture exporter raised in a riverbank slum has won legions of fans with his man-of-the people approach during his time as Jakarta governor.