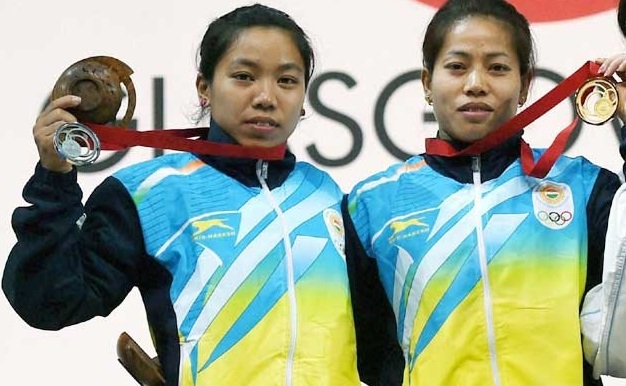 Glasgow:Â Sukhen Dey and K Sanjita Chanu stole the limelight by clinching a Gold each in weightlifting, as India launched their campaign in the 20th Commonwealth Games with a flourish, winning seven medals in all on the opening day of the competitions here.

India is at 4th spot in medals tally with 2 Gold, 3 Silver and 2 Bronze. Judokas Navjot Chana and Sushila Likmabam had to be contend with a silver medal each after they failed to clear the final hurdle in the men’s 60kg and women’s 48kg events, respectively. There was a bronze for for another judoka, Kalpana Thoudam.

In weightlifting, there was a silver medal for S Mirabai Chanu, while Ganaesh Mali bagged a bronze.

The paddlers, shuttlers and squash players had easy outings on the first day, with both badminton and table teams posting convincing wins.

It was a display of overwhelming domination in 48kg women’s weightlifting by the Indians as apart from Sanjita’s gold, S Mirabai Chanu bagged the silver medal to make it a one-two for last edition’s hosts.

In the men’s 56kg contest, the 25-year-old Dey lifted a total of 248kg (109+139) after trailing at the halfway snatch stage, but came back strongly in clean and jerk to win the gold and cap a remarkable day for the Indians at the Clyde Auditorium.

In women’s 48kg weightlifting, Sanjita won with a total lift of 173kg (77+96), while Mirabai grabbed the silver with a cumulative effort of 170 (75+95) in the absence of other strong competitors.

The contest was all but over at the halfway snatch stage with 20-year-old Sanjita and 19-year-old Mirabai lifting 77kg and 75kg.

In badminton, India spanked minnows Ghana and Uganda by identical 5-0 margins in Group B matches of the mixed team event.

In table tennis too, the Indian paddlers hardly broke a sweat on their way to crushing 3-0 wins over Vanuatu and Northern Ireland, respectively, in the men’s section. The women too were upto the task as they recorded a clinical 3-0 win over Barbados 3-0 before beating Nigeria 3-1.

There were disappointment in cycling (track) as Deborah and Mahitha Mohan finished way behind in 10th and 11th position respectively in women’s 500m time trial. K Vargheese was placed 13th. There was also no good news for India from rhythmic gymnastics.

The day truly belonged to the lifters and judokas who combined to give India an impressive tally of seven medals straightaway.

Sanjita and Saikhom Mirabai opened India’s campaign on a flying note by winning a gold and silver respectively in women’s 48kg before Dey and Ganesh Mali bagged the first and third position in men’s 56kg.

Zulheimi and another Malaysian, Mohd Faizal Baharom, gave a tough competition to Dey and Mali from the beginning but the Indians had the support in their side with a seizable crowd rooting for them with the tri-colour in their hands.

Baharom set the ball rolling with a lift of 110kg in snatch and Dey failed to clear 111kg after lifting 109kg in his earlier attempt. Mali, however, did better than his compatriot to lift 111kg and occupy the top slot with Baharom on second with 110kg and Dey on 109kg at third after snatch.

Mali’s effort of 133kg in his second attempt in clean and jerk was adjudged no-lift by the jury, but he cleared the weight in his next attempt. Dey jumped to the top spot with a lift of 136kg, but Zulmeihi came into the mix with a clean and jerk of 136kg to jump to joint second. He then lifted 137kg to equal Dey at the top, leaving Mali at third.

Dey went ahead by lifting 138kg and bagged the top prize.

He tried 146kg in an attempt to break the Commonwealth Games record in clean and jerk but failed. Nonetheless, he ran away with the title.