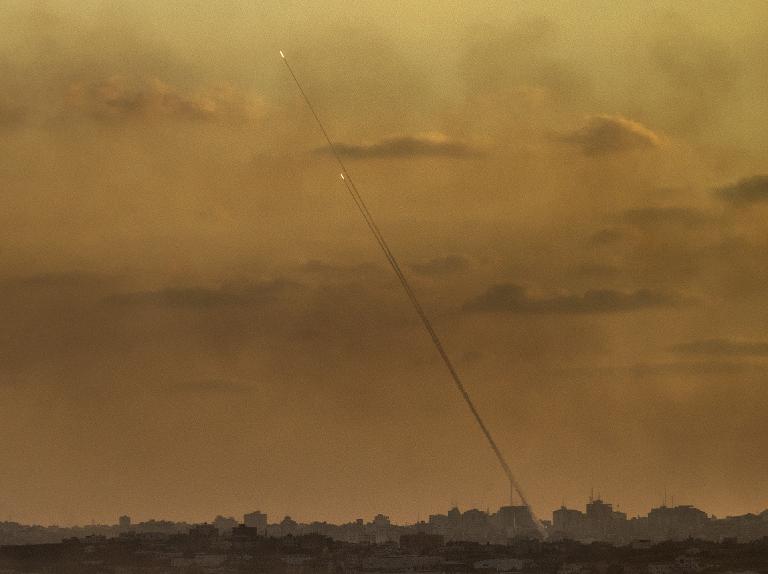 International efforts for a humanitarian ceasefire in Gaza ramped up on Friday, as tensions erupted in the West Bank where four Palestinians were killed by Israeli gunfire.

The United States has worked with Egypt on a plan that, diplomats say, would provide a humanitarian pause in the deadly Israel-Hamas conflict ahead of talks on key issues.

The plan is being pressed by US Secretary of State John Kerry, who is with UN chief Ban Ki-moon in Cairo for talks to end violence that has killed 832 Palestinians as well as 36 people on the Israeli side.

Meanwhile, Hamas claimed it had fired three rockets at Tel Aviv’s Ben Gurion airport, with an army spokeswoman confirming that “two rockets were shot down over metropolitan Tel Aviv”.

In a statement released by his office, Ban called for “an immediate, unconditional humanitarian pause in the fighting in Gaza and Israel.”

“This pause would last through the Eid al-Fitr holiday period,” Ban said, adding that a halt in the fighting could lead to a “longer-term ceasefire plan”.

Ban’s remarks were contained in a speech emailed to reporters, but which the UN said later was a draft of prepared remarks that had “not been delivered”.

His comments tracked reports from Western and Palestinian officials of efforts to secure an initial week-long humanitarian ceasefire to be followed by negotiations on a longer-term cessation of hostilities.

Turkish Foreign Minister Ahmet Davutoglu flew to Qatar on Friday to help efforts after Kerry reached out to Hamas allies Ankara and Doha to push for a ceasefire.

Under the proposal, once a humanitarian lull takes hold, delegations from Israel and Hamas will arrive in Cairo — which has mediated past conflicts between the two — for indirect talks that could lead to a lasting deal.

Hamas’s exiled Doha-based leader Khaled Meshaal insisted in a Thursday interview with the BBC that any truce must include a guaranteed end to Israel’s eight-year blockade of Gaza.

“We want a ceasefire as soon as possible, that’s parallel with the lifting of the siege of Gaza,” he said.

In the West Bank, tensions over the situation in Gaza erupted into protests in several cities after Friday prayers.

Overnight, one Palestinian was killed and 150 injured in clashes in the West Bank, and on Friday afternoon, four more Palestinians were shot dead by Israeli troops and settlers.

In one incident, two Palestinians were shot dead by Israeli troops in the Palestinian village of Beit Ummar near the flashpoint southern city of Hebron, Palestinian security sources said.

A group of Israeli settlers later opened fire on protesting Palestinians after they threw stones at their car near the northern West Bank city of Nablus, Palestinian security sources said.

The settler fire killed one Palestinian, and a second was killed by live bullets shot by Israeli soldiers who arrived on the scene shortly afterwards, the sources added.

Three other Palestinians were injured by live fire in the incident near Nablus, with others suffering the effects of tear gas.

In Gaza, the death toll rose to 832 on the 18th day of the conflict, with a five-year-old child among the latest deaths announced, along with an Islamic Jihad spokesman, and two women, one of them pregnant.

On Thursday, at least 15 people were killed in alleged Israeli shelling on a UN school sheltering some of the 100,000 Palestinians who have fled their homes during the fighting.

The UN said it had been trying to coordinate with the army to evacuate civilians before the strike, without success, but the army said it had offered a humanitarian window, and suggested militants firing rockets in the area could be to blame for the deaths.

Rights groups say around 80 percent of the casualties so far have been civilians, and the UN agency for children UNICEF said Friday that 192 children had been killed during the conflict.

The Israeli army on Friday announced the death of a 36-year-old reserve soldier, bringing the toll of soldiers and officers killed in Gaza since July 8 to 33.

Two Israeli civilians have been killed, along with a foreign worker from Thailand, by rocket fire from Gaza, which continued Friday.

The army said militants fired 25 rockets which hit southern Israel early Friday with another 10 intercepted, bringing the number of rockets and mortar rounds from Gaza that hit Israel since July 8 to 1,870, with another 473 intercepted by the Iron Dome defence system.