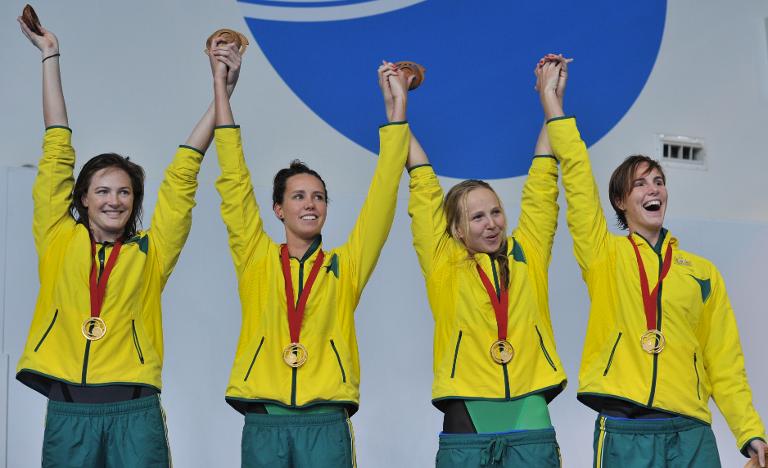 Australia’s swimmers buried their 2012 Olympics flop by claiming two world records on the opening day of the Commonwealth Games which brought only misery for superstars Bradley Wiggins and Mo Farah.

Two years after a controversial Olympics yielded just one gold amidst claims of bullying, wild partying and abuse of prescription drugs, the Aussies were a revelation in the Glasgow pool.

Having already broken the Commonwealth Games record in the heats, the addition of 100m freestyle world champion Cate Campbell to the team of Bronte Campbell, Melanie Schlanger and Emma McKeon proved the difference as they shaved more than seven tenths of a second off the previous record held by the Netherlands.

“It wasn’t even a topic that we had discussed, but I think we all had an inkling in the back of our heads that it was possible,” said Schlanger.

For McKeon, it was a second gold of the night after she had also claimed the 200m freestyle title in a Games record time of 1min 55:57sec.

Australia’s Rowan Crothers broke his own world record to claim gold in the para-sport 100m freestyle in a time of 54:58sec.

Ross Murdoch shattered the Games record for the second time in a day to deny hot favourite Michael Jamieson as Scotland claimed gold and silver in the men’s 200m breaststroke.

Murdoch finished nearly a second ahead of his teammate in a time of 2min 07:30sec, whilst Andrew Willis took the bronze for England.

Glasgow-born Jamieson had been one of the mot prominent athletes in the build-up to the Games having won silver in the same event at the 2012 Olympics.

Hannah Miley had claimed Scotland’s first swimming gold of the Games as she retained her 400m individual medley title in a new Games record time of 4min 31:76sec.

Ryan Cochrane of Canada broke the Australian-Scottish stranglehold in the pool by claiming gold in the men’s 400m freestyle.

It was also a third successive victory in the event for Meares, who has now equalled Kathy Watt’s Australia women’s cycling record of seven Commonwealth Games medals.

“I decided to start cycling after watching Kathy at the 1994 Commonwealth Games and now some 20 years later I beat her in most golds. But breaking the record was not my biggest target. I just wanted to be the best,” said Meares.

“We’ve had limited preparations for this and hopefully will look back in two years with gold medals around our necks (at the Rio Olympics) thinking this was the starting point in Glasgow,” said Wiggins.

The immediacy of the action took some of the sting out of Mo Farah’s shock withdrawal which rocked the Games just as they got underway.

The 5,000 and 10,000 metres Olympic champion, 31, was recently laid low by illness and has decided to pull out of the Games in order to work on his fitness ahead of next month’s European Championships in Zurich.

Kimberley’s sister Louise then completed a family double with victory over Kelly Edwards in the under-52kg final.

There was also a golden double in weightlifting for India when Sanjita Khumukcham won the women’s 48kg title and Sukhen Dey took the men’s 56kg.