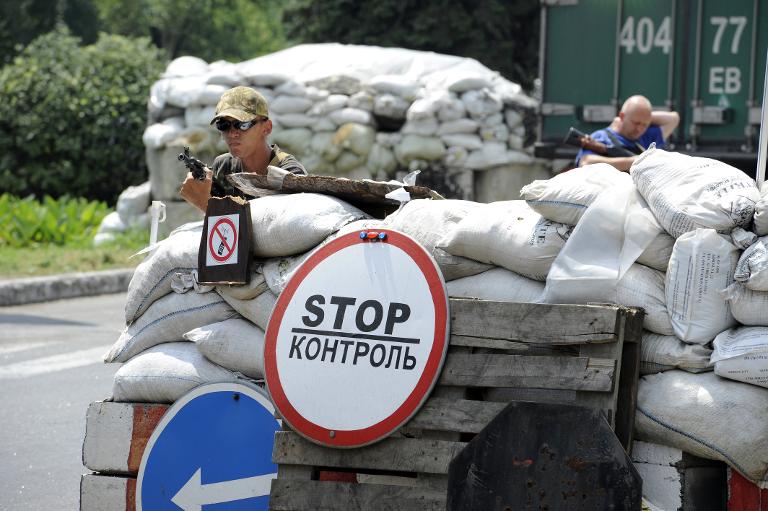 Fighting between Ukrainian troops and rebels raged Thursday near the crash site of Malaysian flight MH17, as countries which lost 298 citizens in the disaster moved to deploy their police to secure the impact zone.

The Dutch team leading the crash probe was stuck in Kiev, unable to join a handful of international investigators at the rebel-controlled site.

Meanwhile, Ukraine’s army reported four soldiers killed over the last 24 hours in its offensive to retake the eastern industrial heartland from the pro-Russian insurgents.

Two Ukrainian fighter jets were shot down Wednesday 45 kilometres (28 miles) from the crash site, just as the first bodies recovered from the fated flight were flown out to the Netherlands, which counts 193 citizens lost in the disaster.

While the Dutch offered a solemn ceremony for the victims’ remains, soldiers hoisting 40 wooden coffins into as many waiting hearses, British experts began analysing the black boxes from the MH17 flight in the hopes of discovering details about the tragedy.

In Brussels EU diplomats were also preparing to stiffen sanctions on Russia, which they allege is arming the Ukrainian separatists accused of bringing down the plane.

And in eastern Kiev, investigators said human remains were still strewn amidst the debris of the wreck, where recovery work has been at a standstill since Tuesday.

Dutch authorities said they can only be sure that 200 corpses have been recovered out of the 298 people killed on board.

Announcing that Australia was ready to deploy police to secure the debris zone, Prime Minister Tony Abbott said that there was still a need for a rigorous search of the site.

“On the site it is still clear that nothing is happening without the approval of the armed rebels who brought the plane down in the first place,” he said.

“There has still not been anything like a thorough professional search of the area where the plane went down, and there can’t be while the site is controlled by armed men with vested interest in the outcome of the investigation.”

Abbott, whose country lost 28 citizens, said 50 Australian officers were on standby in London.

The Dutch cabinet meanwhile is working on a new UN resolution for an armed mission to secure the crash site, sources told national news agency ANP.

Rebels and government forces have declared a ceasefire in the immediate vicinity of the site, but just beyond, fierce fighting was ongoing.

The Ukrainian military said rockets were on Thursday being fired “from the Russian side,” hitting locations close to Lugansk airport and in several areas in the Donetsk region.

Mortar shells also rained down on Avdiyika in Donetsk region, the army said, without giving details of casualties.

An AFP crew heading to one of these combat hotspots Wednesday was turned back by rebels, who fired shots at their car.

Kiev said the missiles that downed two fighter jets on Wednesday were also launched from Russian territory, and that while the pilots ejected safely, there was no information about their whereabouts.

Meanwhile, the Red Cross warned both sides to abide by the Geneva Conventions, declaring that it considered Ukraine to be in a state of civil war.

In Brussels, the EU was looking at punishing Russia, which it accuses of fanning the rebellion in Ukraine’s east by arming the separatists.

Reports said Thursday that the 28-member bloc may go even further than the United States in hitting Russian banks with sanctions over the Ukraine crisis, curbing their ability to raise fresh funds.

If imposed, the sanctions would come just a week after the last round was unveiled by both the US and the EU against Moscow.

US intelligence officials have said they believe the rebels mistakenly shot down the Malaysia Airlines flight from Amsterdam to Kuala Lumpur with a surface-to-air missile provided by Russia.

Moscow has denied the charges and Putin has pledged to “do everything” to influence the separatists and ensure a full probe into the crash.

The first bodies from last Thursday’s crash arrived in the Netherlands on Wednesday, and were given a solemn ceremony. Dozens more were being flown there on Thursday to undergo an identification process that Dutch Prime Minister Mark Rutte has warned could take months.

Dutch police have also been visiting relatives of the victims bereaved to retrieve DNA samples from items such as hairbrushes, and obtain details of tattoos and fingerprints, as well as consulting medical and dental records to help with the identification.