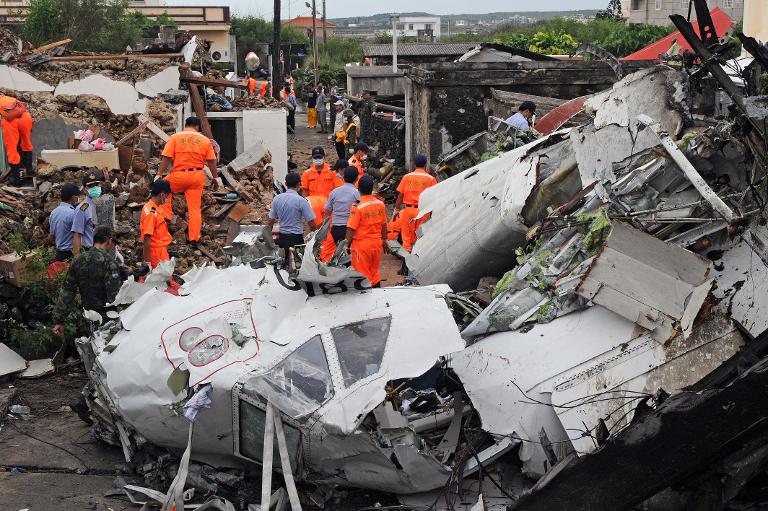 Rescuers said Thursday they had recovered black boxes from the Taiwanese aircraft which crashed in torrential rain killing 48 people, as angry relatives blamed authorities for the worst air disaster in a decade.

The discovery of the black boxes — which record cockpit voice and other in-flight data — raised hopes of an answer to what caused the domestic TransAsia Airways flight to crash in Magong in the Penghu island chain Wednesday, with just 10 survivors.

The ATR 72-500 propeller plane was carrying 54 passengers and four crew members when it plunged into eight houses in Magong on its way from Kaohsiung in southwestern Taiwan, injuring five people on the ground, officials said.

Two French medical students were among the dead, the foreign ministry in Paris said.

Flight GE222 was trying to land for the second time after aborting the first attempt during thunder and heavy rain as Typhoon Matmo pounded Taiwan.

Investigators are looking into the cause of the crash, including why the plane was cleared to fly in bad weather.

“The airline should not let the plane take off in such bad weather,” a man who gave his family name as Hsu, whose 28-year-old son was killed in the crash, told AFP outside a funeral home in Penghu.

“The weather was so terrible and Taiwan was still under the typhoon’s influence, (the plane) shouldn’t have taken off,” the daughter of pilot Lee Yi-liang, who also died, told FTV cable news channel.

But Taiwanese officials defended the decision to allow the flight to go ahead.

“Many people were questioning why the plane took off in typhoon weather… according to my understanding the meteorology data showed that it met the aviation safety requirements,” transport minister Yeh Kuang-shih told reporters.

More than 100 rescuers, including firefighters and soldiers, worked to remove bodies and scattered debris from the site Thursday with a crane brought in to lift the plane wreckage.

Most of the bodies had been removed from the crash site, officials said, where a religious ceremony was held to appease the spirits of the victims.

“A-Lung, mama is here,” an elderly woman wailed, calling for her son’s spirit to follow her home and not to linger at the site.

Officials said 31 of the victims had been identified but warned some of the bodies were so badly injured that DNA testing would be needed.

While initial results from the in-flight recorders, sent to Taipei for examination, are expected within a week, aviation officials cautioned it could take up to a year to determine the cause of the crash.

A man surnamed Chen, who lost six family members including his older brother in the crash, was seen shouting at airline staff in Penghu.

“What happened to the plane and what was the cause (of the crash)? At the very least the (airline) should have someone on the scene to comfort the relatives,” he told TVBS news channel.

At a nearby funeral home, dozens of relatives — including the elderly and children — sobbed as they waited to identify whether their loved ones.

In emotional scenes, overjoyed relatives were reunited with survivors, who were transferred to hospitals in Taipei and Kaohsiung from Penghu for further treatment.

The co-pilot, 39-year-old Chiang Kuan-hsin, had two and a half years’ flying experience. He was also killed in the crash.

The last civilian plane crash in Taiwan was in 2002 when a China Airlines plane bound for Hong Kong ditched off Penghu islands into the Taiwan Strait, killing all 225 crew and passengers on board.