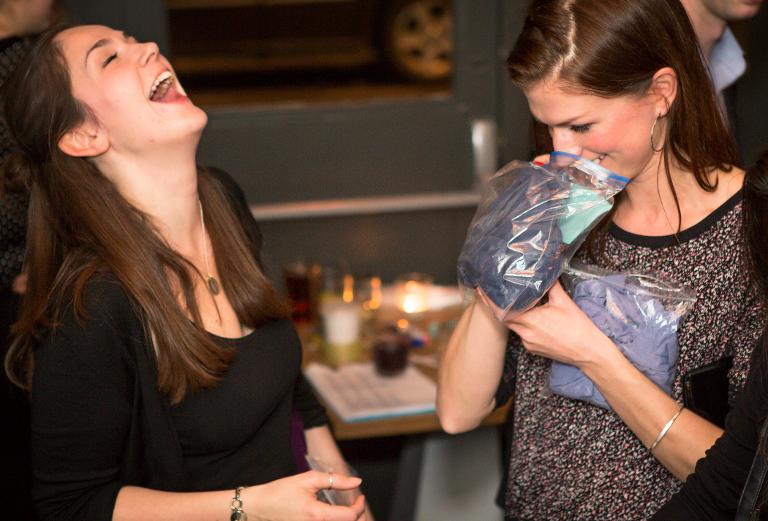 In a bar in trendy east London, dozens of people mill about, sniffing from plastic bags. But there are no drugs inside — just slightly smelly T-shirts.

These adventurous single men and women are at a “pheromone party”, an alternative dating trend based on the idea that smell plays a key role in the choice of a sexual partner.

Each of them has agreed to wear the same cotton T-shirt for three nights in a row, with no deodorant or perfume, and to bring it to the party.

The clothes, infused with the pure scent of the wearer’s body, are placed in transparent plastic bags with numbers on coloured labels — pink for women, blue for men.

“Smell as many bags as you like, have fun!” encourages the organiser, Judy Nadel.

There is some nervous laughter, then a sudden rush for the bags laid out on a big table in the middle of the room.

Some people open the bags carefully, taking a timid sniff, while others plunge their noses right inside.

“This one’s been worn for a few days,” quipped one young man, while his friend Steven Lucas, a 23-year-old law trainee, remarks that the clothes “all smell the same”.

Those who get a sniff of their dream partner snap a picture of themselves with the bag. The images are then projected onto the wall, and the lucky owners of the chosen T-shirts have the chance to meet their admirers.

There are smiles all around and the atmosphere in the bar is playful. “Shall we say ‘hi’, or ‘woof woof’?” jokes one man in passing, before disappearing into the crowd.

“It is such a weird concept. It’s a huge ice-breaker because you are smelling a stranger’s T-shirt — you can’t be cool or pretentious,” Nadel tells AFP.

She launched her pheromone parties in London this year, taking on a concept that was first promoted in the United States in 2010 by artist Judith Prays.

The idea is inspired by a 1995 experiment by a Swiss scientist, Claus Wedekind, and the belief that pheromones — chemicals that are fundamental to the sexual behaviour of animals — can also be picked up by humans.

Six couples got together at the first party in London in March, although Nadel is not sure whether their relationships have lasted.

In a city partial to alternative dating methods, this odorous concept has proved seductive — the two parties so far have both attracted more than 140 people, with plenty left on the waiting list.

“London is such an amazing and vibrant city, but it’s difficult to meet people, and they tend to stick to themselves, in their groups,” says Nadel, herself a single woman who became frustrated with traditional dating websites.

To stimulate the romantic feelings in the room, a masseuse is on hand to offer aromatherapy to the participants.

“I’ve got a mixture of geranium rose with black pepper, so I’m using that to give massages to aid a bit of relaxation,” says Laurie Nouchka.

After a session with the masseuse, Marta Montserrat, 33, rejoins her sister Berta, 29, who is worrying that her T-shirt is missing from the table.

Both sisters, recently single, have come because a friend got them tickets.

They move enthusiastically from bag to bag, breathing in their aromas and trying to judge the character of the wearers from the style and colour of the T-shirt, and how they have been folded or scrunched up in the bag.

But as the night draws on, Marta Montserrat starts to despair of finding her soulmate.

“It doesn’t matter what I smell, if I don’t like what I see,” sighed the chatty brunette, casting an eye around the other participants, none of whom were her “type”.

Bob, 48, stands apart from the crowd and sips his drink. “Funnily enough I was scared that someone would smell my shirt and throw it down,” he confides. Fortunately, everyone remained civilised.