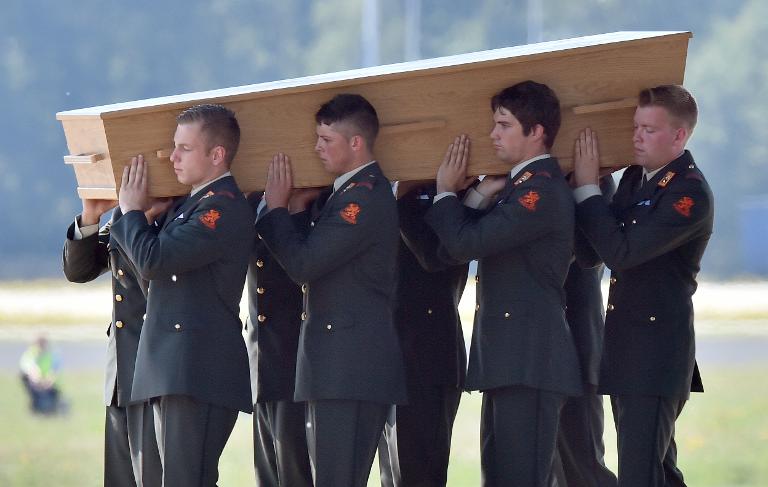 The first bodies from flight MH17 arrived in the Netherlands almost a week after it was shot down over Ukraine, as the conflict flared yet again near the Malaysian airliner’s crash site.

Uniformed Dutch military personnel solemnly hoisted 40 wooden coffins from two planes and placed them in individual hearses at Eindhoven airport in the south of the country in a powerfully sombre ceremony, as a trumpeter played the Last Post and a large crowd of the bereaved watched, shielded from the press.

The televised two-hour ceremony watched across the Netherlands and abroad came in stark contrast to the chaotic and disturbing scenes filmed in the aftermath of the plane crash.

Church bells rang throughout the country as the planes touched down in a much-delayed return for the first as-yet unidentified remains of the 298 people killed in the disaster, most of them Dutch.

In a dramatic new development in the conflict hampering the recovery and investigation effort, Kiev said missiles fired from Russia — accused by the West of provoking the MH17 disaster — took down two of its warplanes in the rebel-controlled area of the crash.

The Netherlands has been united in grief and growing anger because of delays in getting bodies home and over the way pro-Russian separatists have treated the site, the victims’ remains and personal possessions.

The planes left from Kharkiv in Ukraine, where the remains were carried on board by army cadets before a small party of officials.

Around 1,000 bereaved relatives of the 193 Dutch dead, King Willem-Alexander and Queen Maxima, Prime Minister Mark Rutte and representatives of the other bereaved nations met the planes.

The bodies were then driven under police escort to a military base at Hilversum, southeast of Amsterdam, where forensics experts will identify them.

Flags of the 17 nations that lost citizens in the crash flew at half mast at the airport. Malaysia Airways counted 11 nationalities on the passenger manifest, but some had dual nationality.

Motorways along the 100-kilometre (65-mile) route from Eindhoven to Hilversum were closed for the long convoy to pass, with crowds gathering on bridges overhead to throw flowers at the hearses.

A minute’s silence was observed nationwide, during which no flights landed or took off at Amsterdam Schiphol airport, from where the doomed Boeing 777 left six days earlier.

In Amsterdam, thousands dressed in white marched solemnly along the city’s canals before releasing hundreds of balloons into the sky as night fell.

Dozens more bodies are due to arrive in the Netherlands on Thursday, among the 200 which Dutch officials in Ukraine say they have received from the rebels.

Rutte has warned it could take months for the bodies to be identified.

Dutch police have been visiting the bereaved to retrieve DNA samples from items such as hairbrushes and from details of tattoos and fingerprints, as well as consulting medical and dental records to help with the identification.

The plane’s black boxes have been delivered to Britain for expert analysis, and Dutch analysts said on Wednesday they had successfully downloaded the data from the cockpit voice recorder and there was no evidence it had been tampered with.

The flight data recorder is to be analysed on Thursday, the investigators said.

Kiev said the Netherlands and other countries that lost citizens are proposing to send police to secure the area, amid concerns of interference with vital evidence.

Russian President Vladimir Putin has pledged to “do everything” to influence the separatists and ensure a full probe.

US intelligence officials have said they believe the rebels mistakenly shot down the doomed Malaysia Airlines flight from Amsterdam to Kuala Lumpur with a surface-to-air missile.

Violence erupted again Wednesday in the crash zone in volatile east Ukraine, as Kiev said it appeared that two of its fighter jets were shot down with missiles fired from Russia.

“According to preliminary information, the rockets were launched from Russian territory,” Ukraine’s National Security and Defence Council said.

A spokesman for the self-proclaimed Donetsk People’s Republic told AFP its fighters shot down the two aircraft.

Both pilots managed to parachute out of the Su-25 jets, which came down some 45 kilometres (25 miles) south-east of the MH17 crash site towards the Russian border.

The incident came as the International Committee of the Red Cross said it considered Ukraine to be in a state of civil war, and warned both sides to abide by the Geneva Conventions.

Putin is staring down fresh European sanctions just a week after the latest set was unveiled over its role in the Ukraine crisis, which has chilled East-West tensions to the lowest point in years.

European Union ambassadors are to meet in Brussels on Thursday to discuss broadening the list of individuals punished by sanctions.

Ukrainian government troops are pushing on with their offensive to wrest control of east Ukraine’s industrial heartland from the pro-Moscow separatists.