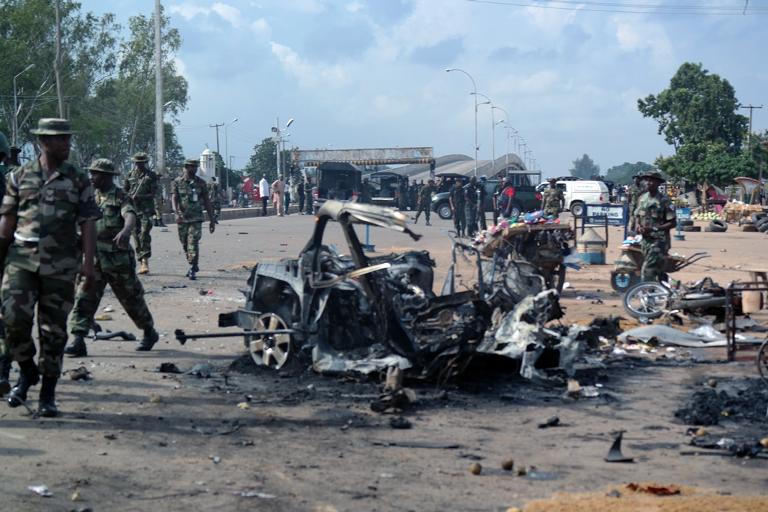 Two bombings in a key Nigerian city targeting a prominent cleric and a former head-of-state killed at least 42 people on Wednesday, in the latest violence blamed on Boko Haram Islamists.

Officials ordered everyone off the streets and imposed an around-the-clock curfew to restore order in the targeted city of Kaduna, as rescue workers raced to care for the dozens of wounded.

Police said the first attack was carried out by a suicide bomber on the convoy of Sheikh Dahiru Bauchi, a cleric who has fiercely criticised Boko Haram’s deadly five-year uprising.

The second attack some two hours later that killed 17 people targeted Muhammadu Buhari, one of Nigeria’s most prominent opposition leaders who also ruled the country as a military dictator from 1983 to 1985.

In a statement Buhari called it “clearly an assassination attempt” when an attempt was made to ram his car as it passed through a market area and a bomb was denoted which “destroyed all three cars in our convoy”.

“Unfortunately, when I came out of my vehicle I saw many dead bodies… innocent people going about their daily business,” said Buhari, who escaped injury.

Buhari has also faced threats from Boko Haram, which accuses him of betraying Islam by accepting democratic rule.

While there was no immediate claim of responsibility, the circumstances pointed directly to the Islamic extremists whose uprising has increasingly threatened the stability of Africa’s most populous country and top oil producer.

President Goodluck Jonathan denounced “the dastardly targeting of the prominent political and religious leaders by terrorists and enemies of the nation”.

He also said the government would continue and intensify its efforts “to curb the menance of terrorism,” the presidency statement said.

Maiyaki added that the governor was worried about an outbreak of chaos in a city that has known sectarian clashes in recent years, because the two targets, Bauchi and Buhari, “hold eminent positions in the eyes of the people.”

Bauchi was travelling in an open-roofed truck in Kaduna’s Isa Kaita area when the bomb off. Well-wishers had gathered on the roadside to greet him, according to witness Mustapha Sani.

Sani said the blast splattered the blood and flesh of the bomber and his victims on the cleric’s convoy.

Boko Haram has sought to brand Nigeria’s senior Islamic leaders as traitors for submitting to the authority of a secular government, currently led by Jonathan, a devout Christian.

Buhari, a leader of the opposition All Progressives Congress (APC), lives in Kaduna but was travelling out of the city through the Kawo area when his car was attacked.

Musa Illala of the National Emergency Management Agency described the area as a commuter hub packed with people trying to catch a bus to their home village ahead of Eid festivals marking the end of Ramadan.

At least 17 people died in the second blast, he said.

Buhari came runner-up to Jonathan in Nigeria’s 2011 election and is among the favourites to emerge as the APC’s presidential candidate in polls set for next year.

Kaduna, a religiously divided city which was once the political capital of the north, has seen relatively little Boko Haram violence in the last 12 months.

Human Rights Watch in a report this year warned that religious tensions remain high and the governor’s spokesman said the total ban on movements was needed to ensure that “mischief makers” did not use the unrest as a pretext to “cause chaos.”

But whether or not the violence spurs a deadly aftermath, the twin bombings underscore the worsening security situation across northern Nigeria.

Islamist gunmen have in recent months attacked civilians at will across the remote northeast, the group’s historic stronghold, but 2014 has also seen major unrest in key urban centres.

The capital Abuja has been hit by three separate bombings, while a double car bombing in the key central city of Jos killed at least 118 people in May.

Jonathan, facing unprecedented pressure to contain the bloodshed, has asked parliament to approve a $1 billion foreign loan to upgrade the security services.

Some analysts have described the request as a tacit acknowledgement by the president that his military is overmatched by Boko Haram who are blamed for killing more than 10,000 people since 2009.