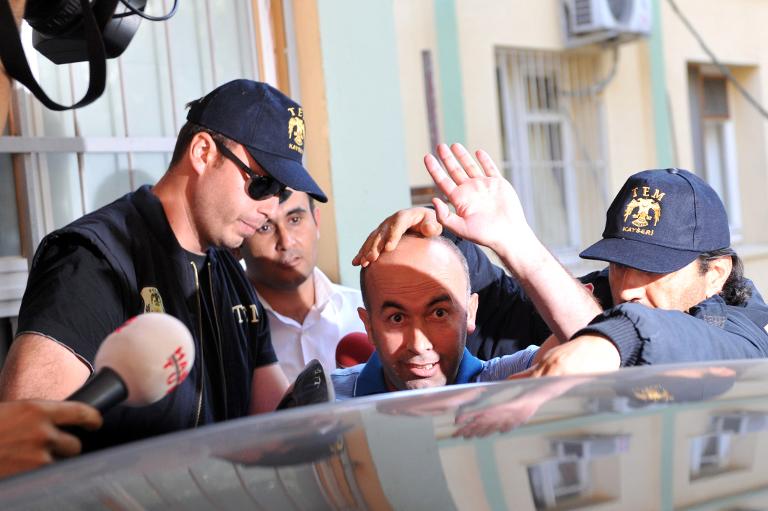 Most of the arrests were in Istanbul but raids were also carried out in the capital Ankara and cities including Izmir and Diyarbakir.

The arrests are the latest round in a bitter feud between Erdogan and his former ally Fethullah Gulen, in the wake of a vast corruption scandal that broke late last year implicating the prime minister and his inner circle.

Supporters of exiled cleric Gulen in the police force were widely blamed for leaking details of scandals.

The latest wave of arrests is set to further inflame political tensions in Turkey as Erdogan attempts to take the presidency in August 10 elections, having been prime minister for more than a decade.

Most of the suspects reportedly held key positions in the anti-graft probe against Erdogan, where some of the evidence came from recorded telephone conversations.

Among those held were two former heads of the city’s elite anti-terror unit, Omer Kose and Yurt Atayun.

“I surrendered but as you see they put the handcuffs behind my back,” Atayun told reporters. “It is all political,” he said when asked why he was detained.

In a show of defiance, the former deputy head of the intelligence department of the Istanbul police, Hayati Basdag, raised his handcuffed fists high above his head in front of the press.

The suspects are accused of espionage, illegal wire-tapping, forging official documents, violation of privacy, fabricating evidence and violating the secrecy of an investigation, the reports said.

The public prosecutor’s office in Istanbul said in an earlier statement that arrest warrants had been issued for 115 suspects and 67 had been detained.

One inquiry is into a police investigation of an alleged terrorist group called “Selam-Tevhid”, which prosecutors said was used as a cover to wiretap prominent figures since 2010, including Erdogan, cabinet members, as well as the head of Turkey’s National Intelligence Organisation (MIT), Hakan Fidan.

Prosecutors said 2,280 people in total — of whom 251 were the main targets — had been illegally wiretapped for three years “despite a lack of evidence about the formation of a terrorist organisation”.

Their real aim was “espionage”, not the state’s security, they added.

The second inquiry is about illegal wiretapping of around 250 people including lawmakers, judges, high-ranking bureacrats and journalists. But it was not clear if this was conducted by the first group.

In his first reaction to the raids, Erdogan hinted that the anti-Gulen probe would widen.

“We are currently watching. We will all see what will come out of this,” he told reporters at the Turkish parliament.

Asked if the drive to purge Gulenists from the state apparatus would be expanded, he replied: “It appears so, of course.”

Erdogan has accused supporters of Gulen of holding excessive influence in the country’s police and judiciary and of concocting the graft scandal to unseat him ahead of local elections in March.

After 11 years in power which has seen his government tame the influence of the once-powerful military, Erdogan has declared a war against Gulen, accusing him of running a “parallel state”.

In a television interview on Monday, Erdogan vowed bitterly that the fight against the Gulen movement would continue “non-stop” while calling on the United States to extradite the exiled cleric from his base in Pennsylvania.

“I expect the United States to take a stance on the Gulen issue,” Erdogan said.

Erdogan faced the worst crisis of his rule after allegations that he and his allies engaged in huge corruption which ranged from bribery to gold smuggling and illicit trade with Iran.

It dragged down four ministers and prompted a cabinet shake-up, and posed the most serious challenge to Erdogan’s government since it came to power in 2002.

His Islamic-leaning government has already sacked thousands of police and prosecutors believed to be linked to the movement in the wake of the scandal, and tightened controls over the judiciary and the Internet.

Gulen, who left for the US in 1999 to escape charges of anti-secular activities by the government at the time, has denied being behind the graft allegations against Erdogan.