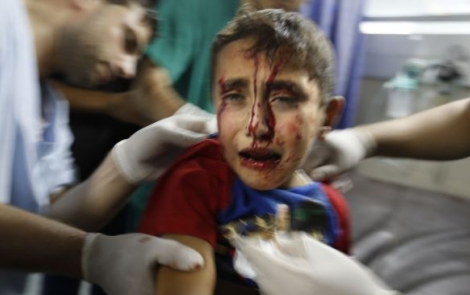 New York: At least 149 children were killed in the Gaza Strip by Israeli fire as of July 23, according to the United Nations. The spiralling number of children killed in the latest conflict between Israel and the Palestinian group Hamas in Gaza has raised international concern.Â

On Saturday, the UN children’s agency, UNICEF, said children made up one third of civilian casualties in the conflict so far.Â “From July 8, until 4:00am on July 19, at least 73 Palestinian children have been reported killed as a result of airstrikes and shelling Israel aerial, naval and ground forces,” UNICEF’s Catherine Weibel said. Â

The Israeli army later said that a preliminary investigation showed the children were the “tragic” victims of a strike targeting “Hamas terrorist operatives”.Â

A senior army official said on Saturday that the military was “sorry” about the deaths of women and children.Â “When you fight there are mistakes,” he said.

Gaza is home to 1.8 million people, one of the most densely populated places on earth. Israel alleges that Hamas uses the population as a human shield and fires rockets from civilian areas and infrastructure.

She also raised concerns about the long-term effects of the violence on Gaza’s children, many of whom are now living through their third war in less than six years. Israel and Hamas fought similar conflicts in Gaza in both 2012 and over the New Year in 2009.

“You have children who are going to be scarred for life because of what they are seeing,” said Weibel.Â Even before the war, some 60,000 children in Gaza were in need of psychosocial support, she said, and the number is expected to soar after this conflict.

The potential for such problems is evident every day in Gaza â€“ wide-eyed children seeing their relatives and friends buried after shelling.Â One boy among the crowd hit by Israeli fire on the beach escaped unhurt, but was hysterical and inconsolable.Â “They’re dead, they’re dead,” he cried over and over.