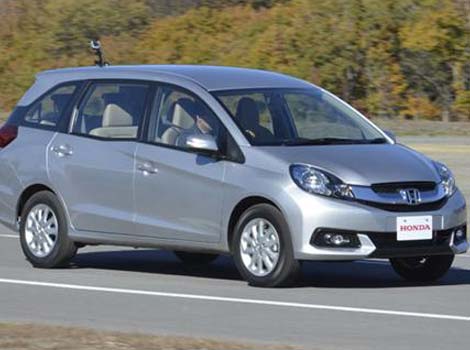 New Delhi: Honda has launched its maiden Multi-purpose Vehicle (MPV) Mobilio in the Indian market on Wednesday. The new MVP is available in both Petrol and Diesel variants. Starting price for petrol version is set at 6.49 lakh (Ex-showroom Delhi) and top petrol version at 8.76 lakh.

The Honda Mobilio is 4.4-metre, with long wheelbase of 2.6-metre and has a ground clearance of 185mm. The front looks are similar to the Amaze sedan and Brio hatchback; it manages to be distinct with its stretched out proportions and non-boxy looks. The Mobilio looks the most distinct from the rear as all resemblance to the hatch and a sedan ends with a new set of tail lamps and plenty of curves.Â

Mobilio gets a two-tone interior colour scheme. The seats are flexible with plenty of storage space, with a generous amount of cabin space and good amount of headroom. The third row seat gets adequate knee room and can be used for long drives; this makes Mobilio different from other MPVs. The interior of the Mobilio is similar to Brio and Amaze.Â

The petrol variant gets the 1.5-litre i-VTEC unit producing power of [email protected] rpm and 145Nm of torque and is peppy and is the same that powers the City. Both engines are mated to a 5-speed manual transmission.
Â