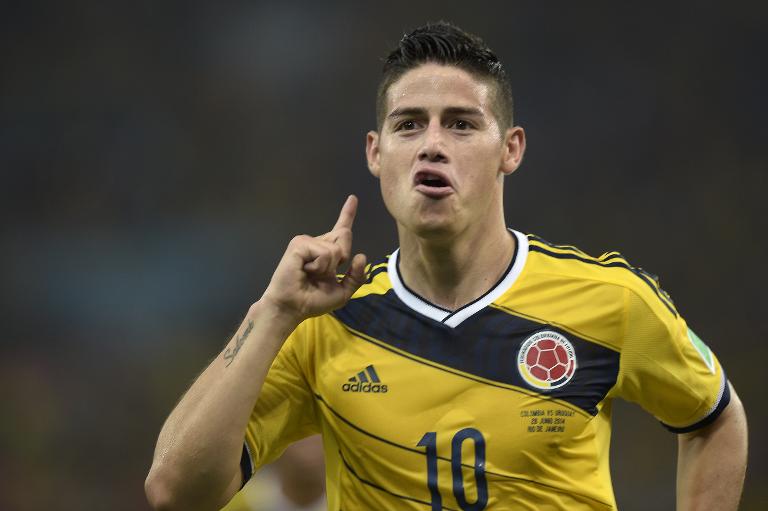 James Rodriguez’s spectacular volley against Uruguay was crowned the best goal of the World Cup on Monday as speculation mounted that he will soon be unveiled as Real Madrid’s latest big money signing.

Spanish sports dailies Marca and As said Real had agreed a deal worth between 75 and 80 million euros ($100-$108 million) with the Colombian striker’s French club Monaco and he could be presented as a new signing on Tuesday.

The 23-year-old is waiting in Europe for the call to Madrid while his teammates prepare for a pre-season friendly in Miami, the reports said.

Rodriguez became the hot property of the World Cup with his six goals that gave him the Golden Boot for the top scorer.

In a FIFA.com poll, his volley against Uruguay in the last 16 was declared goal of the tournament by more than four million voters — three quarters of those who took part.

Rodriguez collected a ball on the edge of the penalty area with his back to the Uruguay goal. He chested the ball over his head, turned and fired the volley into the goal via the underside of the crossbar.

The goal established the global reputation of the young playmaker, who cost Monaco 45 million euros (60 million dollars) one year ago when he was signed from FC Porto of Portugal.

Marca newspaper said Real will pay 75 million euros straight away and up to five million more in add ons.

If confirmed, the fee would make Rodriguez the fourth most expensive player in history behind Gareth Bale, Cristiano Ronaldo (both of Real) and Luis Suarez who joined Barcelona this month.

Monaco’s coach Leonardo Jardim denied any knowledge of a transfer when asked about Rodriguez’s future at a press conference in Colombia on Sunday.

Monaco, who have Rodriguez and fellow Colombian international Radamel Falcao on their books, played a friendly there before moving on to Miami.