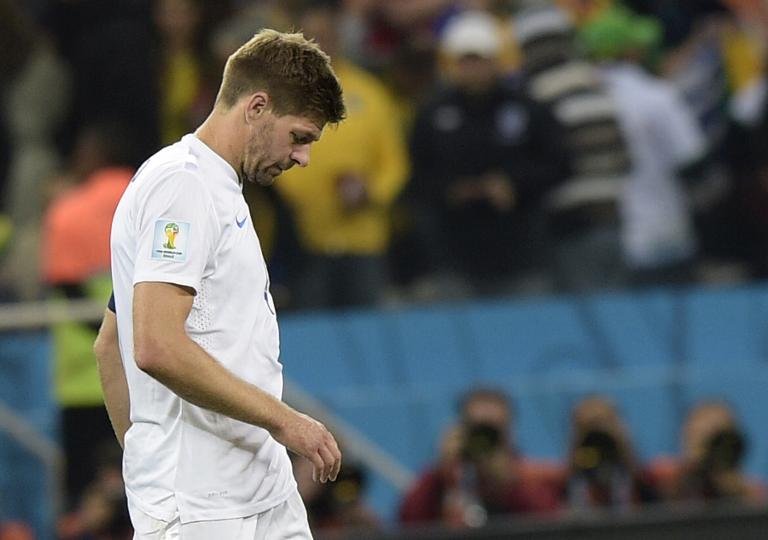 As Steven Gerrard soaked up thunderous applause from England’s supporters at full-time in Belo Horizonte, he looked surprised and relieved by the generous response to his team’s dismal World Cup campaign.

The 17-minute substitute appearance in a meaningless draw against Costa Rica proved to be Gerrard’s last England appearance after the Three Lions captain announced his retirement from international duty on Monday.

The 34-year-old took his last curtain call on the global stage when he waved in response to the England cheers that seemed so out of place in a tournament in which Roy Hodgson’s team took only one point from three matches.

It was a symbolic epitaph for Gerrard’s England career, which left the player himself and his legion of admirers frustrated that he never quite dominated in the manner he has for Liverpool.

After winning 114 caps, behind only Peter Shilton (124) and David Beckham (115) on his country’s all-time appearance list and captaining England at two World Cups, Gerrard will rightly be remembered as a loyal and proud servant.

But while Gerrard’s application in an England shirt could never be questioned, the quality of his performances often fell short of the stratospheric standards he reached in Liverpool colours.

While Gerrard’s signature moments for Liverpool are many and varied — few will ever forget his heroics in Istanbul in the 2005 Champions League final and his 2006 FA Cup final masterclass against West Ham — for England he was mostly diligent but lacking inspiration.

He scored 21 times for England, starting with a blistering strike from outside the penalty area in the memorable 5-1 thrashing of Germany in September 2001.

Yet he never netted against another top-level international opponent, with his remaining goals coming against a motley crew including the likes of Macedonia, Andorra, Belarus and Trinidad and Tobago.

That chilly night in Munich when Gerrard inspired the German demolition seemed to promise such a bright future for the midfielder, who was making only his sixth England appearance.

“That was my favourite England game,” Gerrard said. “We had to get a result and we completely played them off the park.”

But he failed to scale those heights for England again, instead becoming one of the now tarnished ‘golden generation’ who never made it past the last eight at a major tournament.

Gerrard was handed his first England cap by Kevin Keegan against Ukraine in 2000 and he insisted from that moment on he “enjoyed every minute of representing his country”.

If that is really the case, Gerrard must have some masochistic tendencies.

He made his tournament debut at Euro 2000 when England bowed out in the group stages, then missed the World Cup two years later due to a groin injury.

Gerrard, whose failure to establish a strong midfield partnership with Frank Lampard was a constant problem, was unable to stop England crashing out of Euro 2004 on penalties against Portugal in the quarter-finals.

Two years later Gerrard would miss a penalty against the same opponents in Germany, where England again lost on spot-kicks in the World Cup quarter-finals.

Gerrard was made vice-captain by Steve McClaren, but England failed to qualify for Euro 2008 after a 3-2 loss to Croatia.

He went on to take the armband for the 2010 World Cup, but a 4-1 last 16 exit against Germany brought a chastening end to that campaign.

Gerrard hinted before the World Cup in Brazil that it would be his international swansong and he wanted to go out on a high.

But he struggled to hit top form and cried tears of frustration after his critical mistake led to Luis Suarez scoring the late winner for Uruguay that effectively eliminated England.

For that to be Gerrard’s last significant contribution for England is hardly fair to such a decent and dignified man, but somehow it was in keeping with the sombre mood of his international career.