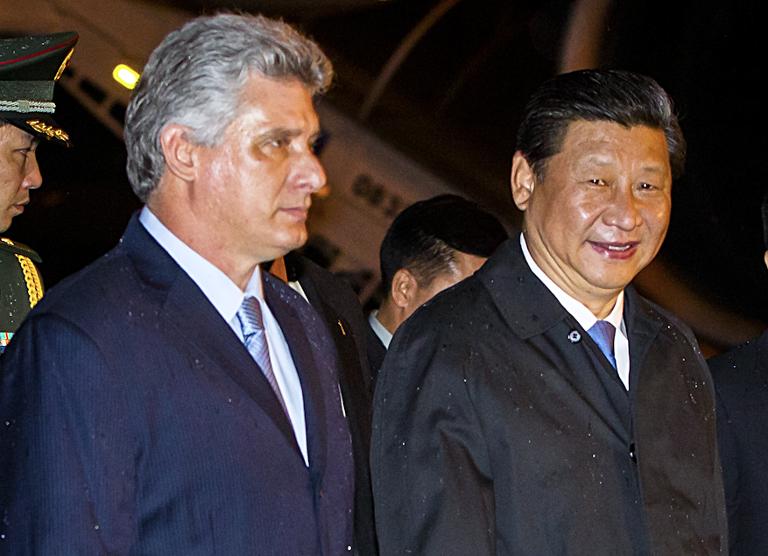 Cuba, the only one-party communist state in the Americas, began opening up its economy in 2008, but has not grown as much as hoped and could desperately use more Chinese investment.

Xi for his part has made a point during his tour of reaching out to countries often shunned by US and European investors, including Venezuela and Argentina as well as Cuba.

“This visit will realize the aims of boosting friendship, deepening mutual trust, expanding cooperation and driving development, opening a new phase in the mutually beneficial, friendly cooperation between China and Cuba,” said Xi after touching down Monday night in Havana.

The opening of the Cuban economy — which some analysts see as an effort to follow in the footsteps of the booming Asian giant — has created new opportunities to tighten bilateral ties, said Xi.

“Cuba is already fully promoting the updating of its economic model, which means new and important development opportunities for Chinese-Cuban ties,” he said.

China is already the Caribbean island’s second-largest trading partner after Venezuela and its primary source of credit, filling the gap left by the US economic embargo on Cuba and its long-time exclusion from institutions such as the World Bank.

Coinciding with Xi’s trip, about 50 Chinese entrepreneurs traveled to Havana to explore business opportunities, attracted by foreign investment incentives and the future Mariel free trade zone outside the capital.

Xi is due to meet with President Raul Castro, 83, at the Palace of the Revolution, for the signing of a range of bilateral deals.

The second day of his visit will take him to Santiago de Cuba, the country’s second-largest city, hit hard by Hurricane Sandy in October 2012.

The Chinese president may also pay a visit to retired revolutionary leader Fidel Castro, 87, who led Cuba for five decades until failing health prompted him to hand power to his brother eight years ago.

Such a visit would echo one by Russian President Vladimir Putin, who kicked off his own Latin America tour in Cuba 10 days ago by meeting with Castro.

The aging father of the Cuban Revolution called the visits “historic” in an article in official newspaper Granma.

China and Russia “are two countries called to lead a new world that will allow the survival of humanity,” he said.

The Chinese and Russian leaders’ tours have underlined their growing ties with a region often considered the United States’ back yard, and bookended a summit of the BRICS group of emerging powers where calls for less US and European dominance of international affairs took center stage.

The Cuban president hailed the move as contributing to “a new international order.”

Xi kicked off his tour last week in Brazil by proposing a new $20-billion infrastructure fund for Latin America, underlining the fast-growing Asian giant’s increasing interest in the resource-rich region.

He has also visited Argentina and Venezuela, offering cash-strapped Buenos Aires an $11-billion currency swap and signing a raft of oil and mineral deals with Caracas.

Chinese trade with Latin America has grown rapidly in recent years, reaching $261.6 billion in 2013. China is now the second-largest trading partner of many countries, including Argentina and Cuba, and has been Brazil’s largest since 2009.

That is a dramatic change from 1990, when China ranked just 17th on the list of Latin American export destinations.

This is Xi’s second visit to Latin America since taking office in 2013. Last year he toured Mexico, Costa Rica and Trinidad and Tobago.