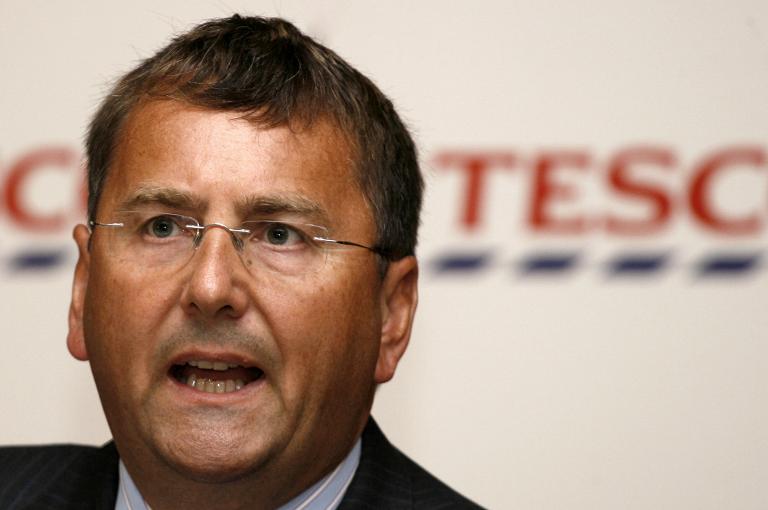 Struggling supermarket giant Tesco on Monday announced the exit of its chief executive, issued a grim profit warning and appointed an outsider to try and transform the company’s fortunes.

Britain’s biggest retailer said in a statement that Philip Clarke, 54, who has been at the helm for three years, will be replaced in October by Unilever director and turnaround specialist Dave Lewis.

The news sent Tesco shares climbing as investors bet that Lewis will reinvigorate the struggling supermarket.

The world’s third-biggest retailer on Monday also warned that sales and profits would miss expectations in the first half of its current financial year.

Lewis, 49, has worked at Dutch food and cosmetics firm Unilever for almost 28 years, during which he has been responsible for a number of business turnarounds. His current role is Global President, Personal Care.

Tesco has struggled in recent years as shoppers have turned to German-owned discount retail chains, and its profits have been cut by so-called supermarket price wars.

The company faces fierce competition in Britain from Aldi and Lidl, as well as its traditional supermarket rivals comprising Wal-Mart division Asda, Sainsbury’s, Morrisons and Waitrose.

“Having taken the business through the huge challenges of the last few years, I think this is the right moment to hand over responsibility and I am delighted that Dave Lewis has agreed to join us,” said Clarke, who has been chief executive since March 2011.

“Dave has worked with Tesco directly or indirectly over many years and is well-known within the business.

“I will do everything in my power to support him in taking the company forward through the next stage of its journey.”

The statement stands in stark contrast to Clarke’s June pledge that he was “not going anywhere,” as he faced fierce criticism after Tesco revealed its worst British sales performance for 40 years in the first quarter.

British sales excluding petrol in stores open at least a year sank 3.7 percent in the three months to May 24 from a year earlier, its third successive quarterly drop, it revealed last month.

In April, the group posted the second drop in annual profits in a row, hit by difficult trading in Europe and a costly investment plan aimed at turning around its domestic business.

Adding to the gloom, Tesco revealed on Monday that trading so far this year has also been underwhelming.

“Current trading conditions are more challenging than we anticipated,” the company said.

“The overall market is weaker and, combined with the increasing investments we are making to improve the customer offer and to build long-term loyalty, this means that sales and trading profit in the first half of the year are somewhat below expectations.”

The group is battling weaker sales in its main market in Britain and launched a Â£1.0-billion (1.26 billion euros, $1.7 billion) investment programme in April to attract more shoppers.

Tesco is the world’s third-biggest supermarket group after France’s Carrefour and top rival, US retailer Wal-Mart.

Clarke, who has worked his way up from the shop floor to the Tesco boardroom, has overseen expansion into India and China in a bid to offset weakness in Europe.

Over the past two years, meanwhile, Tesco has also decided to close its failed US division Fresh & Easy and exit from Japan.

“The march of the discounters Aldi and Lidl continues, whilst Tesco’s prior advantage in the form of its overseas operations is not what it once was.

“The question now will be whether the new chief executive will have the courage to take early aggressive action, potentially going toe-to-toe with the discounters and impacting earnings.”