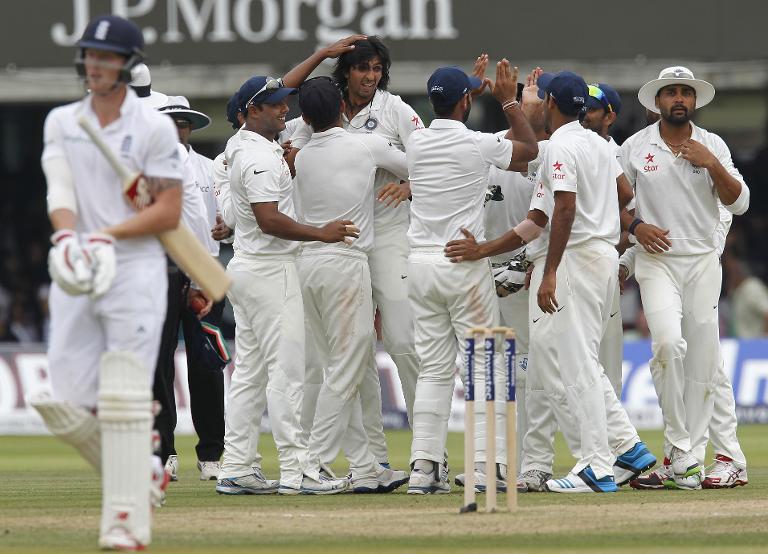 Ishant Sharma took seven wickets as India ended a run of 15 Tests without an away victory in an emphatic 95-run win over England at Lord’s on Monday.

This victory, only India’s second in 17 Tests at Lord’s, put the tourists 1-0 up in the five-match series ahead of the third Test in Southampton on Sunday. The first Test in Nottingham was drawn.

“I felt in the last couple of series outside India (in South Africa and New Zealand) were were in a position to win,” said India captain Mahendra Singh Dhoni.

“What was important was to keep working hard and it was just fantastic to see the determination and effort the guys showed.”

England, set 319 for victory, collapsed to 223 all out on Monday’s final day.

Sharma took four wickets for nine runs in 21 balls after lunch as a succession of England batsmen were undone by his bouncer.

In total, the 25-year-old finished with a Test-best seven for 74 to win the man-of-the-match award.

But Sharma said Dhoni deserved credit for encouraging him to bowl short.

“I don’t think all the wickets are for me, they are for the captain because he’s the one that told me, ‘you are tall enough so you have to bowl a bouncer, you have to use your height’. That’s what I did and it worked for me.”

This result extended England’s run without a Test victory to 10 successive matches.

However, under-pressure England captain Alastair Cook said he would not quit as skipper.

“Until that bloke taps me on the shoulder and says ‘we don’t want you to captain’ I’m desperate to try to turn this around for England…I’m here as long as I’m wanted.”

Monday’s slump saw England, who had been 173 for four, lose their last six wickets for 50 runs.

Sharma’s final figures surpassed the his previous Test-best six for 51 against New Zealand in Wellington earlier this year.

England looked as if they would bat through Monday’s first session without losing a wicket.

But to the very last ball before lunch, Moeen Ali turned his head away from a Sharma bouncer and gloved a simple catch to Cheteshwar Pujara at short leg.

The resumption saw several England batsmen fall to bouncer traps that could not have been more obvious had they been signposted.

Wicketkeeper Matt Prior, who has had a torrid season behind the stumps, decided to hook Sharma. Several men were positioned for the shot in the deep, Prior did not get over the top of the ball and picked out Murali Vijay at mid-wicket.

Ben Stokes fell for a duck when he miscued an intended pull to Pujara at wide mid-on.

Stuart Broad too could not cope with a rising delivery, gloving Sharma down the legside to wicketkeeper Dhoni, with England now on the brink of defeat at 216 for nine.

The match ended when James Anderson was run out by Ravindra Jadeja’s direct hit, with the two players both facing a possible suspension following their alleged confrontation at Trent Bridge.

England collapsed to 72 for four on Sunday, with Sharma removing the two senior batsmen in Cook and Ian Bell

Cook was out for 22 to make it 27 innings since the last of his England record 25 Test hundreds.

Bell fared even worse, bowled for one as his run without a Test century was extended to 19 innings.

Cook elected to field on a typically English ‘green top’ after winning the toss and saw India decline to 147 for seven.

But, not for the first time in recent matches, England failed to polish off the tail as India made 295 with Ajinkya Rahane scoring 103.

It was a similar story in India’s second innings when, after opener Vijay’s patient 95, an eighth-wicket stand of 99 in just 100 balls between the dashing Jadeja (68) and Bhuvneshwar Kumar (52) saw the tourists to 342.