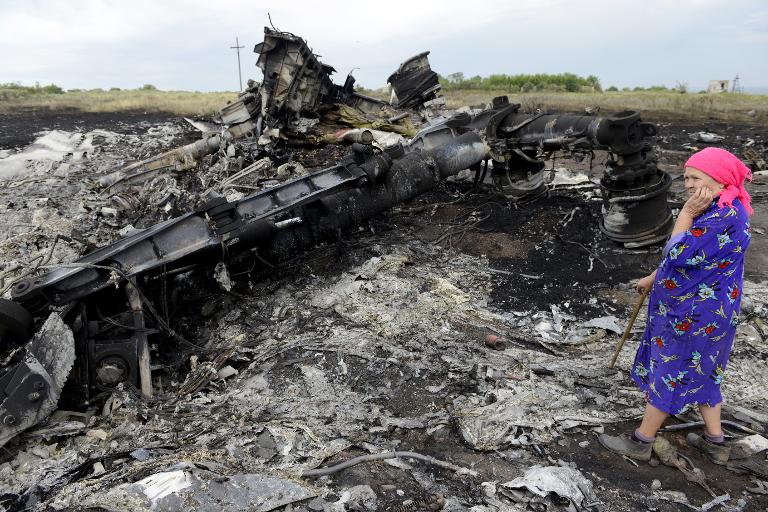 Ukraine on Saturday accused Russia of helping insurgents destroy evidence at the crash site of a Malaysian jet whose downing in the rebel-held east has drawn global condemnation of the Kremlin.

Outraged world leaders have demanded Russia’s full cooperation with what is becoming a monumentally challenging probe into the shooting down of a Kuala Lumpur-bound flight from Amsterdam with 298 people from a dozen countries on board.

Gunmen backed up by muscular diplomatic support from the Kremlin have shown few signs of being ready to cooperate with an investigation that could blame them for blowing apart the Boeing 777 jet.

International monitors were met on Saturday by Kalashnikov-wielding militias who allowed them access to only the outskirts of the field — its swaying sunflowers hiding dismembered remains of charred and decomposing bodies of victims whose lives were cut short on Thursday.

The grisly site has turned into the epicentre of the Cold War-style standoff between the West and an increasingly isolated Moscow — its diplomatic reputation questioned around the world — over the future over the war-scarred former Soviet state.

The Ukrainian government issued a furious statement declaring that “terrorists with the support of Russia are trying to destroy proof of this international crime”.

Kiev said armed fighters were hours away from loading vital clues aboard trucks that would be rushed across the Russian border before a full team of experts inspected the expansive site where remains of flight MH17 hit the ground.

The explosive charges set off near-panic across global capitals on Saturday.

Malaysia’s transport minister expressed alarm before boarding a flight to Kiev over “indications that vital evidence has not been preserved in place”.

And Dutch Prime Minister Mark Rutte — his tiny nation mourning the loss of 192 compatriots — said he had called on Russian President Vladimir Putin during a “very intense” conversation to “take responsibility” for a credible probe.

“One of the crucial questions is the fate of the black boxes,” said Organisation for Security and Cooperation in Europe spokesman Michael Bociurkiw.

He said the Vienna-based group’s monitoring team on the ground had been “unable today, for the second day, to gain any answers to that question”.

The head of the self-proclaimed Donetsk People’s Republic into whose airspace the doomed jet strayed to avoid bad weather said his men had never recovered the data recorders or tamper with evidence.

But he found the Kremlin’s verbal backing eroding as the day wore on and global pressure on Putin mounted.

Moscow announced after talks between US Secretary of State John Kerry and Russian Foreign Minister Sergei Lavrov that “material evidence, including black boxes” must be immediately handed over to inspectors.

The diplomatic wrangling was accompanied by uninterrupted fighting across Ukraine’s eastern rustbelt — a Russia-speaking region of seven million people who largely view the more nationalistic west of the splintered country with mistrust.

Ukrainian forces reported taking full control of the main airport of the neighbouring separatist stronghold of Lugansk and launching all-out offensives against two nearby towns.

Government troops said they had also established full control of Donetsk airport for the first time since it was seized at the end of May in a bloody raid that saw militias lose more than 40 fighters — most of them Russian nationals.

US President Barack Obama and major world leaders now agree that the Malaysia Airlines jet was blown out of the sky at 33,000 feet (10,000 metres) by a sophisticated surface-to-air missile fired from rebel-controlled territory.

Kiev has gone a step further by accusing militias of using a Russian-supplied Buk system to down the jet after confusing it with a Ukrainian military transporter.

Ukraine has released recordings of what it said was an intercepted call between an insurgent commander and a Russian intelligence officer as they realised they had shot down a passenger jet.

But Putin on Thursday blamed the tragedy on Kiev’s three-month military operation and said its new leaders were solely responsible for security across the strategic nation — since its 1991 independence the geopolitical marker between Russia and the West.

Moscow has also drawn some governments’ ire by questioning why the packed jet was flying over a combat zone in the first place.

The plane’s downing came less than a day after the United States unleashed punishing sanctions against some of Russia’s most important energy and military firms — most of them with links to Putin — and urged more hesitant European leaders to follow suit.

“I think that this certainly will be a wake-up call for Europe and the world that there are consequences to an escalation of the conflict in eastern Ukraine,” Obama said in a special address.

The European Union — many of its member states dependent on Russian gas — took the far less punitive step on Friday of curbing some future investments in Russia and leaving the option open for broader sanctions.

But British Prime Minister David Cameron said he and his Dutch counterpart had agreed the bloc “will need to reconsider its approach to Russia in light of evidence that pro-Russian separatists brought down the plane”.

US Department of Defense spokesman Rear Admiral John Kirby also argued that “it strains credulity that (the missile) can be used by separatists without some measure of Russian support and assistance”.

Putin rejects all charges of providing either funding or military support to the insurgents in order to punish the new pro-Western leaders in Kiev for the February ouster of a Kremlin-backed president.

Rebel commanders have also denied being in possession of any functioning Buk systems — a claim that contradicts an earlier announcement of them having seized some from Ukrainian troops.

Kiev has released footage purportedly showing militias trying to covertly send one Buk unit back across the Russian border.