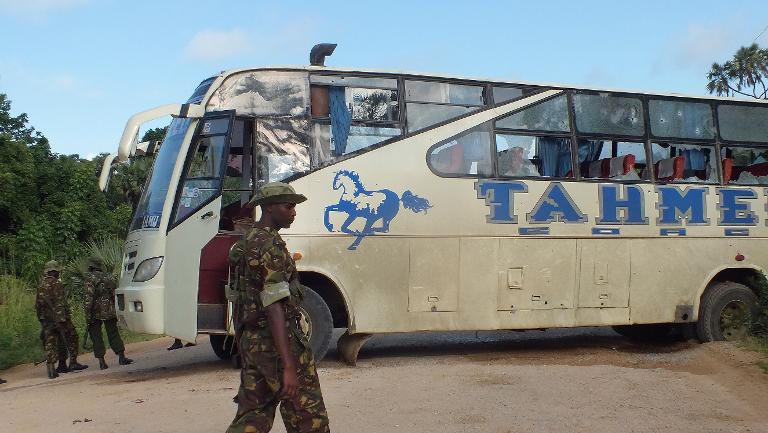 Somalia’s Al-Qaeda-linked Shebab on Saturday claimed an attack on a bus near the Kenyan vacation island of Lamu in which seven people were killed.

The Kenyan Red Cross said five civilians and two police officers died late on Friday when armed men opened fire first on a bus, then on a car and a police vehicle, near the town of Witu, 50 kilometres (30 miles) from Lamu island.

On Saturday police announced a month-long night curfew in the region, where repeat attacks have left dozens dead and driven tourists from what was once a renowned island paradise.

A Shebab spokesman told AFP by telephone the group was “ready to act or attack anywhere necessary within Kenya.”

“The attacks are a clear response to the government of Kenya’s false claim that they beefed up security in the area,” said Shebab military spokesman Abdulaziz Abu Musab.

He added that the withdrawal of Kenyan troops from Somalia “is the only hope for a sort of normality”.

But the group denied involvement in a separate incident — an alleged suicide bomb attack on a militia leader in Somalia that reportedly killed six people on Saturday.

According to police accounts of the first attack, gunmen opened fire on a bus travelling from Mombasa to Lamu. They then targeted a police car which stopped to intervene, and also hit a third car.

Authorities refused to comment on reports that several people from the bus have gone missing and may have been taken by the attackers.

Somalia’s Shebab has carried out similar attacks in the past, saying they were in retaliation for Kenya’s military presence in Somalia as part of the African Union force supporting the country’s fragile government.

Lamu, a UNESCO World Heritage site, has been hit by a series of attacks since mid-June which has left a total of 94 dead, according to a Red Cross tally.

The attacks have fuelled divisions on the coast, a region where radical Islam, ethnic tensions and land disputes are an explosive cocktail.

Also on Saturday, a prominent militia leader in southern Somalia pinned the blame on Shebab for what he called a suicide attack on his home in which six people.

Iftin Hassan Basto, a tribal leader who has fought with the Islamist group in the past, said a child was among those killed by the blast in the port city of Kismayo.

“The explosion occurred soon after I entered the house,” Basto said in a statement. “My security guards saw a man who tried to infiltrate and when they confronted him he blew himself up.”

“We knew (the Shebab) were planning such attacks and we will continue fighting these terrorists,” he added.

One witness, Ali Mohamed, said: “The explosion was huge and several dead bodies were removed from the house. Security forces have cordoned off the area after the explosion.”

But the Shebab dismissed the charged and said one of Basto’s guards was responsible.

“There was no attack on his home, but his amateur guards fired a rocket launcher inside the house,” Musab, the group’s military spokesman told AFP.

Kismayo was a former stronghold of the Shebab before Kenyan troops captured it in late September 2012.

The Shebab have increased their scope of operations since last September, when they launched an attack on Nairobi’s Westgate mall in which at least 67 people were killed.

In May the Shebab carried out a restaurant bombing in Djibouti, while Uganda and Ethiopia — countries which also contribute to the AU force in Somalia — have been on high alert.