Home Sports Its the pits for Hamilton in Hockenheim 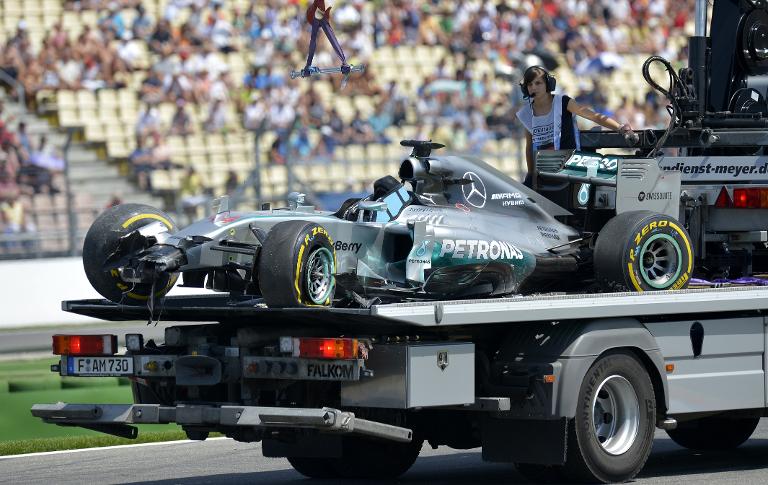 Lewis Hamilton may have to start Sundayâ€™s German Grand Prix from the pit lane after his Mercedes team indicated they are likely to change brake suppliers for his car following his high speed crash during qualifying.

The 29-year-old had switched to Brembo brakes on Saturday morning, but following a failure of his right front disc that pitched him into a collision with the barriers at the Sachskurve the team said they wanted to revert to Carbone Industrie discs on Hamiltonâ€™s car.

Changing brake specification is a breach of the parc ferme regulations that would require Hamilton therefore to start the 67-lap race from the pit lane.

â€œWe have had a brake failure which means we are obliged to make sure that the car is running safe tomorrow,” said team motorsport boss Toto Wolff. “That means switching the brakes supplier.

â€œIf this results in starting from the pit lane (it) is not yet discussed, and we have not yet brought the decision on that. But we are discussing that with (ruling body) the FIA.”

To add to Hamiltonâ€™s woes, the team added that it was not sure if he would also be handed a five-place grid penalty for changing his gearbox, if it is needed.

Hamilton qualified 16th, but was expected to start 15th on the grid thanks to a penalty for Mexican Esteban Guttierez of Sauber.

Hamilton, who frequently switches between different brake disc suppliers, said his decision to switch from Carbone Industrie to Brembo was based on feel.

He said: â€œYou can choose the brake that perhaps doesn’t bite as much at the beginning, but has more bite later on, has less fade. In these temperatures, there can be fade on some brakes — I chose these ones because they have more stopping power which means I can brake later.”