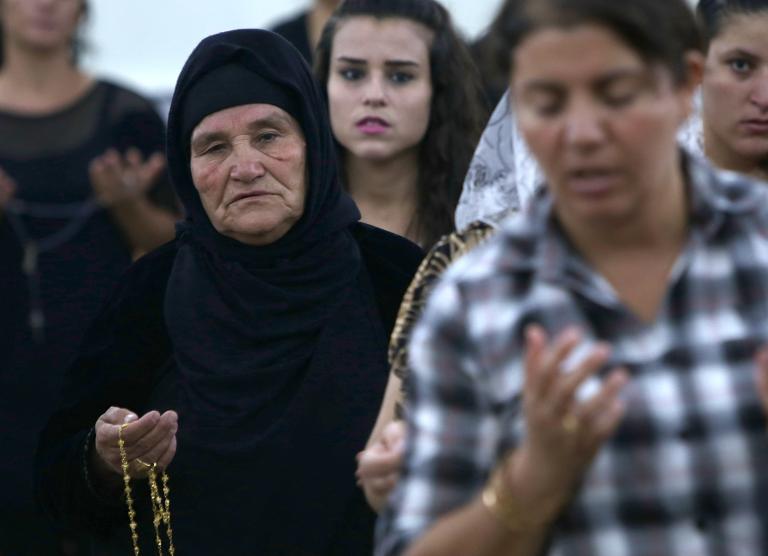 Hundreds of Christian families fled their homes in Mosul Saturday as a jihadist ultimatum threatening their community’s centuries-old presence in the northern Iraqi city expired.

President Jalal Talabani flew home after 18 months abroad for medical treatment but restricted access at the airport in his Kurdish fiefdom of Sulaimaniyah offered no clue as to his health.

There was little hope in any case that the 80-year-old’s return could buck Iraq’s downward spiral as bickering politicians prepared to pick his successor and the country’s worst crisis in years reaped its daily harvest of dead and wounded.

An AFP correspondent in Mosul, the main Iraqi hub of the Islamic State (IS) group’s proclaimed “caliphate”, said Christians squeezed into private cars and taxis to beat the noon deadline.

“Some families have had all their money and jewellery taken from them at an insurgent checkpoint as they fled the city,” said Abu Rayan, a Mosul Christian who had just driven out with his family.

The jihadists, who have run the city since a sweeping military offensive that began six weeks ago, had told the thousands of Christians in Mosul they could convert, pay a special tax or leave.

An earlier statement by Mosul’s new rulers had said there would be “nothing for them but the sword” if Christians did not abide by those conditions by 0900 GMT on Saturday.

While some families initially appeared prepared to pay the “jizya” Islamic tribute to stay in their homes, messages broadcast by mosques on Friday sparked an exodus.

A teacher who gave his name only as Fadi was among a handful who had decided to stay.

“I’m staying. I already feel dead,” he told AFP by telephone moments before the deadline ran out. “Only my soul remains, and if they want to take that I don’t have a problem.”

Chaldean patriarch Louis Sako, who heads the largest Christian community in Iraq, estimated there were still 25,000 Christians in Mosul on Thursday.

The Iraqi Red Crescent said at least 200 families had fled on Saturday alone.

“This is ethnic cleansing but nobody is speaking up,” Yonadam Kanna, Iraq’s most prominent Christian politician, said.

Other minorities rooted in the same province of Nineveh — such as the Yazidis, as well as the Turkmen and Shabak Shiite communities — have suffered even more, with many kidnapped and killed.

The mass displacement was the latest in weeks of turmoil which has forced more than 600,000 people from their homes, left thousands dead and brought Iraq to the brink of collapse.

Many of the displaced have sought the safety of the neighbouring Kurdistan region of northern Iraq, where Talabani was welcomed by his close entourage off the private aircraft that flew him back from Germany.

“A German medical team is accompanying Talabani to monitor his health,” Begerd Talabani, a niece of the president and a member of the Kurdish parliament, told AFP.

His Patriotic Union of Kurdistan party said Friday the avuncular octogenarian was ready to resume his duties but sources close to Talabani said a doctor and two nurses would remain by his side, suggesting he was still frail.

When fighters under the command of IS leader Abu Bakr al-Baghdadi launched their assault last month, the Kurdish peshmerga he once commanded held their own and even moved into disputed areas that had until then been under Baghdad’s control.

The federal forces for their part collapsed, in some cases abandoning uniforms and weapons in their retreat.

Security analysts have said Baghdad remains too big a target but the militants have repeatedly attacked targets that would expose the capital if captured.

A total of 75 people were wounded in the blasts, one of which appeared to target a senior police officer, police and medical sources said.

Bomb blasts, killings and kidnappings have also caused huge displacement in the capital, turning a once very mixed city into a honeycomb of religiously homogenous neighbourhoods.

In the village of Safra, a former member of the Awakening anti-jihadist Sunni militias was killed, together with his wife, child, parents and brother, police and hospital sources told AFP.

Prime Minister Nuri al-Maliki is facing growing calls to step down, including from within his own Shiite alliance which comfortably won April elections, in order to advance national reconciliation efforts.

Parliamentary blocs have until Sunday to submit nominees for the post of president, whose election is the next step in what has been a protracted and acrimonious process to renew Iraq’s leadership.

According to an unofficial power-sharing deal reached after the 2003 US-led invasion of Iraq, that job should go to a Kurd.

Talabani’s stature transcended bitter feuds within the Kurdish camp but there is little expectation the ailing head of state will seek another term.