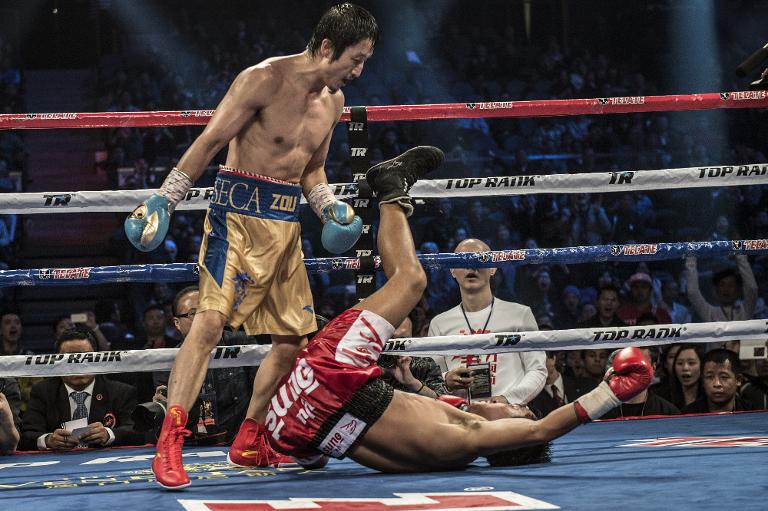 Flyweight Zou Shiming’s win in a gritty 10-round bout over Colombia’s Luis De La Rosa on Saturday night has boosted the Chinese boxer’s determination to go for a shot at the world title.

Zou, who claimed the vacant World Boxing Organisation international flyweight title with the win, fought all rounds of his first ever 10-round match against Colombian veteran De La Rosa, in a show of increasing confidence and competence.

The bout was evenly matched until Zou discovered some extra aggression against veteran De La Rosa who sustained an injury to his left eyebrow at Macau’s glittering Venetian casino resort.

The crowd went wild chanting “Go Zou Shiming, go!” as both fighters unleashed punches on each other for the all-out final round.

But Zou came out on top when the match went to the score cards where all three judges unanimously declared him the winner.

The victory improved the undefeated 33-year-old’s record to 5-0 with one knockout further allaying his critics following some unconvincing performances after making the leap from amateur bouts.

“I’m very confident, I’m ready for the world title,” the two-time Olympic champion replied in responsen to a question by AFP over whether he now felt prepared to go for the top spot.

“I have been preparing for a world title ever since day one. I think after tonight’s fight I’m more confident,” he explained at a press conference after his win.

“After going through 10 rounds I’m more confident to go for the 12 round”, he added.

“My opponent, who was a great opponent, he did very well today, so all of that makes this a more meaningful victory.”

Earlier in the evening, Cuba’s Guillermo Rigondeux remained undefeated after knocking out Thailand’s Sod Looknongyangtoy in just one minute and 44 seconds of the opening round with a flurry of punches.

Mexico’s unbeaten southpaw Gilberto Ramirez, who made his debut on the international stage, retained total control of his fight and knocked out Australia’s Junior Talipeau in the opening round.

Zou is being lined up to challenge International Boxing Federation (IBF) world champion Amnat Ruenroeng of Thailand in Macau in November, a fight which would attract huge interest in China’s largely untapped market.

The exploits made him a household name in China, where boxing was banned under Mao Zedong, and where his fledgling professional career has been closely followed.