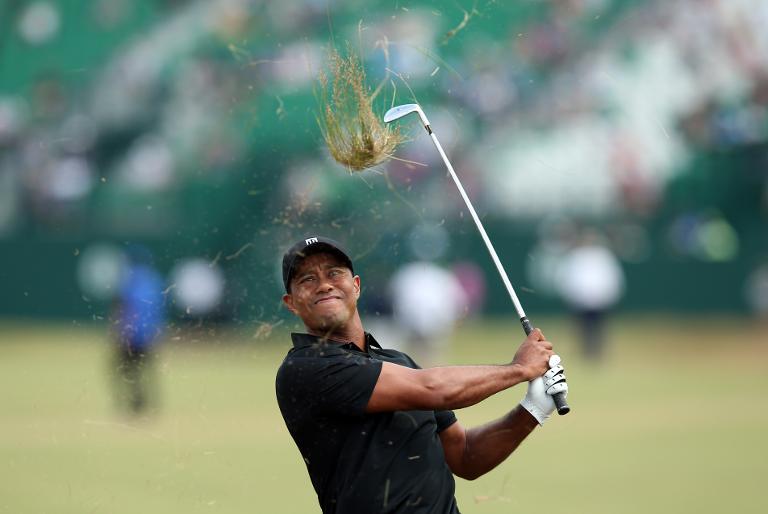 Tiger Woods never recovered from a disastrous start and needed a pressure birdie putt on the 18th to barely make the cut on Friday, although his chances of winning the Open at Hoylake were in tatters.

An already mediocre round took a nasty turn for the worse at 17, when he drove out of bounds for a triple bogey that left him one shot outside the two over par cut off, and setting up a nerve-shredding final hole.

However, he scrambled from the rough again on the par-five 18th and chipped within six feet before sinking his first birdie of the day much to the delight of the packed stands surrounding the drama.

The American megastar, who showed flashes of brilliance during his opening 18 holes, crumbled as early as the first tee when a wild shot into the rough led to his first double bogey at a major since 2009.

He was five over par for the opening two holes over two days, which left him with a hole he was never able to dig himself out off.

Going into the weekend, his hopes of that much coveted 15th major and first since 2008, appear now to be a fantasy dream, with runaway leader Rory McIlroy a whopping 14 shots ahead.

“I got off to a terrible start again. I had some opportunities but I never made anything”. Woods told BBC Sport.

“I had myself in good position to make birdies but I never did. Hopefully I can do something like Paul (Lawrie) did in 1999, make up 10 in one day.” he added in reference to Lawrie’s comeback from 10 shots down to win the Open at Carnoustie in 1999.

Dressed all in black, one of his most popular colours during his heyday, Woods carried a grim face around the par-72 Royal Liverpool layout in front of an army of fans that never got to cheer a birdie until the last green.

Instead, a run of 14 pars in a row from the second hole onwards, before the damaging triple bogey, made the 2006 champion at Royal Liverpool look human for a change after his years of glory that made him the best known sportsman on the planet.

The gusting winds that accompanied the three-time Open winner and his playing partners for the second day, Henrik Stenson, the Swedish world number two and Angel Cabrera of Argentina, were not as powerful as the morning session and birdies were there for the taking.

However a stone cold putter left him shaking his head in disappointment as chance after chance to lower his score blew away with the Wirral peninsula winds.

As the leaderboard flashed that Northern Ireland’s McIlroy was pulling away from the field with some sublime golf, Woods could never muster a charge of his own to limit the damage.

A score of two over for the tournament, just kept him alive, but with 36 holes to play, the Florida resident needs a minor miracle to bring back the world famous smile that was seen so often on the way to his 14 major titles and 79 PGA victories.

With a flurry of red numbers decorating the leaderboard and better afternoon conditions, Woods failed to take advantage.

Instead, he can take heart from a late slice of cheer that avoided a second straight missed cut for the first time in his career, and an embarrassing early exit from the most prestigious tournament in golf.

He is, however, playing only his fourth round of competitive golf since much needed back surgery.

He now has a chance to restore some pride over the final two rounds after blowing cold on the hottest day of the year in England.