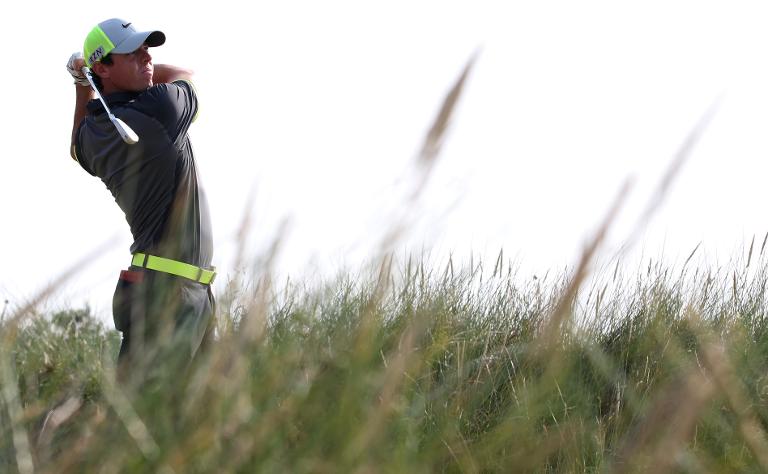 Rory McIlroy’s dominance so far of the British Open at Hoylake has left his main rivals gasping for air and hoping that the weather might come to their rescue.

The Irishman will go into the weekend’s final 36 holes with a four-stroke lead over his nearest challenger Dustin Johnson with the rest of the field trailing by at least six.

It’s all so reminiscent of the Congressional Club outside Washington three years ago when an imperious McIlroy led wire-to-wire to win the US Open, his first major title, by a whopping eight strokes.

He could have been even further ahead for Saturday’s third round were it not for missing two makeable putts at the 11th and 12th in Friday’s second round.

“When his driver is on, he’s almost unstoppable,” said fellow young gun Rickie Fowler, one of those grouped six strokes back off McIlroy and hoping to make up ground on him.

“He’s a very good driver of the ball when he is on. I know he gets a little off here and there, but there’s not a whole lot of weaknesses. He’s not scared to go and keep going.”

Still Fowler, like some of the others trying to hold on to McIlroy’s coattails believe they could get some relief from a weather forecast for Saturday that predicts “disruptive weather” and a “significant risk of thunderstorms and heavy rain.”

The forecast is so bad that tournament organisers the R&A have decided to bring forward the start of play to earlier in the day at 9:00am and, in an unprecedented move, to use groupings of three going off from the the first and 10th tees instead of everyone going off from the first in pairs.

“These measures combined give us the potential to accommodate up to five hours of delay and still complete the third round tomorrow evening,” the R&A’s Executive Director of Rules David Rickman said.

“If he is playing the way he is right now and keeps playing through the weekend, he’s definitely going to be hard to catch,” said Fowler.

“But I know the weather could throw in a little mix there tomorrow. We’ll see what happens.”

World number one Adam Scott, who is nine strokes behind McIlroy after a disappointing 73 on Friday said he would relish the bad weather, seeing it as an opportunity to rekindle his hopes of a first Open title win.

“Seems like we’re going to see it all over the weekend, maybe. Tomorrow doesn’t look great, and I think that’s all right,” he said.

“The last 36 of the major is going to be a grind. And if it’s tough conditions, you know, I’m certainly up for that challenge.

“The tougher it gets I think more of that favors me, if I can keep swinging well.”

Others, like Ryan Moore, who is also six of the pace, say that they are not interested in who they have to beat.

“You know I don’t think much about who’s around me or who’s ahead of me,” the American said.

“For me it’s just simply I’m showing up tomorrow. I’m going to play as hard as I can and see what happens.

“In the majors it’s one or two or several of the best players in the world that are going to be up top and that’s just how it goes.”