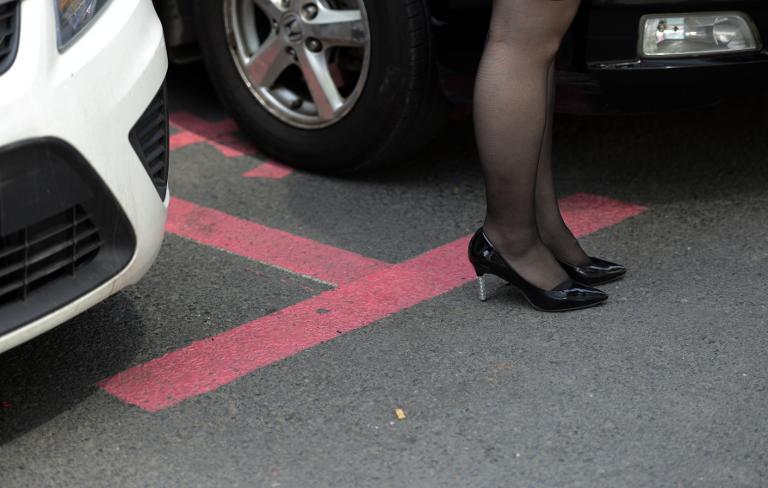 The parking spaces outside a Chinese shopping mall are distinctive: marked out in pink, signposted “Respectfully reserved for women”, and around 30 centimetres wider than normal.

The slots at the Dashijiedaduhui — or “World Metropolis” — centre have sparked debate in China, which officially embraces gender equality but where old-fashioned sexism is rife in reality.

The mall, in the centre of the northern port city of Dalian, has little to distinguish itself from thousands of other retail complexes that have sprouted across the country as part of a vast urbanisation drive.

Unusually, though, the 10 spaces outside the main entrance were provided after women had trouble parking in the standard basement slots, managers said.

“I think this is very convenient,” said user Yong Mei. “Other parking spaces are too narrow.”

“It’s not gender biased,” she told AFP. “It’s just that women have a few issues with vision when parking.”

But outraged commentators on Chinese social media accused the mall managers of sexism and cliched thinking.

“This is supposed to respect women, but actually it’s an insult,” said one.

The mall managers deny the allegation. “We just wanted to make things easier for women, who make up most of our customers,” said Yang Hongjun, a woman herself.

“It’s not an insult to women at all,” she added. “If their parking spaces are larger, it’s only for practical reasons. It doesn’t mean that women drive less well than men.”

Officially, China proclaims the sexes equal in keeping with Communist principles, and Mao Zedong said that “women hold up half the sky”.

But conservative attitudes remain deeply ingrained, and women are conspicuous by their rarity in the upper echelons of Chinese politics and the ruling party, dominated by men in black suits.

One online poster on the Dalian car park said: “The two most dangerous things in the world are men who cook and women who drive.”

Manufacturers’ advertisements in the world’s biggest auto market are invariably aimed at male buyers, and a man at the mall, Wu Zhicun, said: “Women don’t really know how to park a car.”

“The few times I’ve come close to crashing was basically with women driving the other car,” he added. “I’ve noticed they’re a bit rough at the wheel, they only look forwards, too often they ignore their mirrors.”

But driving standards in China are often lamentable, regardless of which gender is at the wheel. According to state media reports, officials said 60,000 people died on the roads in 2012, the most recent figures available.

The parking initiative is not unprecedented — other countries have similar female-dedicated spaces, including South Korea and various European nations.

The latest Chinese controversy echoes a series of microblog posts Beijing police made last year advising women on driving techniques — including not wearing high heels, releasing the handbrake before setting off, and not panicking if they suddenly realise they’re going the wrong way.

“Some women drivers lack a sense of direction, and while driving a car, they often hesitate and are indecisive about which road they should take,” reads one of the entries on the police department’s verified microblog.

Another featured a cartoon depicting a confrontation between a police officer and a woman driving a vehicle shaped like a large red high-heel shoe.

According to a World Health Organization estimate in March 2013, globally males are more likely to be involved in accidents than females, and 77 percent of all road traffic deaths occur among men.

Even so, for some posters the Dalian parking places amounted to discrimination against male drivers.