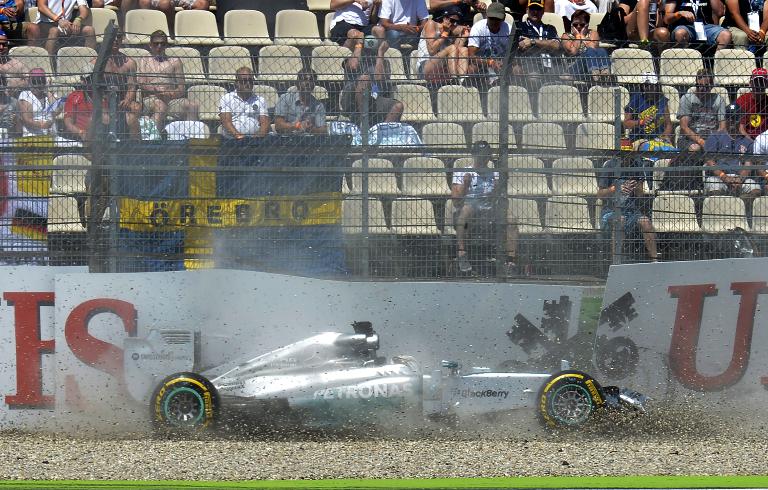 The 29-year-old Briton, who is just four points behind his Mercedes team-mate Nico Rosberg of Germany in their duel for the drivers title, lost control of his car when it spun at the Sachskurve during the first part of qualifying.

He hit the barriers heavily, but despite being shaken and groggy was able to climb from his wrecked car and walk away.

Rosberg went on to take pole for the fifth time this season, for his home race, but admitted it was not as satisfying as if he had enjoyed a fair and full fight with his team-mate.

Hamilton, 29, will start from 15th position on the grid.

“For now, it’s been going really well. Home race, to be on pole is fantastic. I would have preferred if it was an open fight with Lewis so I’m less happy as a result,” saidRosberg.

Hamilton told Mercedes by radio that he suspected a brake problem had been to blame and a Mercedes investigation confirmed that the 2008 world champion lost control of his car due to a right front brake disc failure.

Mercedes motorsport boss Toto Wolff revealed that the brake disc had been fitted for qualifying following third free practice in the morning, when Hamilton was six-tenths of a second slower than Rosberg.

Hamilton was taken to the medical centre after the crash, having complained of hurting his knees, but was given the all clear by doctors.

Afterwards, asked how he felt, he said: “A little bit sore, but I’ll be OK. I’ve got a little bit of pain, but that’s what usually happens when you have a crash like that.

“Even if something’s broken, I’ll still be driving tomorrow.â€

He added: “I can’t believe it, but things like this happen. They’re sent to try us. The guys had done such a great job with the set-up and it felt great.

“The guys did lots of tests with the brakes and it should have been alright, but it’s one of those things.

“It takes you by complete surprise. When you’re driving, you always have to have 110 per cent confidence in the car, and then you hit [the brakes] and it’s a real shock.

“We’ll figure something out. There are still a decent amount of races to go and we’ll do what we can tomorrow.”