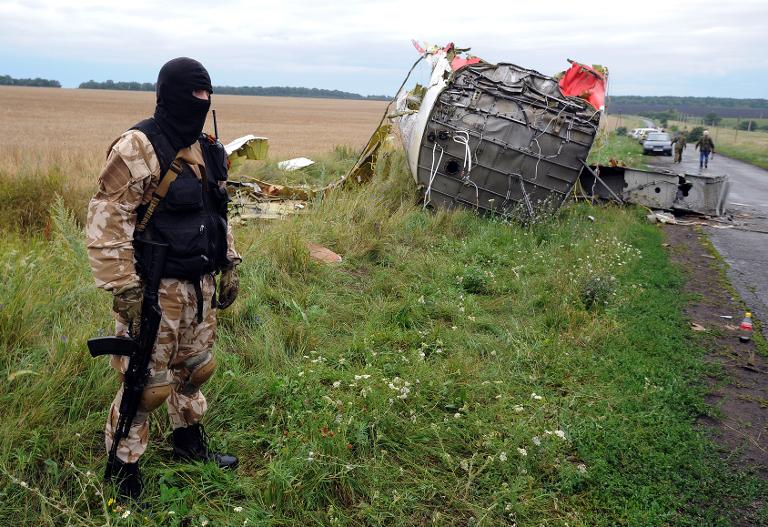 Investigators faced massive hurdles Saturday as they sought access to the grisly crash site of a Malaysian plane in eastern Ukraine, with the area controlled by armed rebels blamed for downing the jet with a missile.

Despite a hail of calls from around the globe for a swift probe into the crash, initial efforts by international monitors to gain full access to the site have been impeded by pro-Russian separatists locked in fighting with Ukraine forces.

The fate of the vital black boxes — at least one of which was reported to have been recovered — was unknown. AFP journalists at the site say dozens of mutilated corpses remained scattered around the vast area, the scale of which appears to have overwhelmed local rescue workers.

While the rebels, who Kiev and the US believe fired a sophisticated surface-to-air missile at the jet, have vowed to protect the scene, they have ruled out a ceasefire and rocket-fire still rings out in the distance.

Dutch Foreign Minister Frans Timmermans, whose nation was stunned by the loss of nearly 200 citizens in the crash, arrived in Kiev Friday with a team of 15 forensic experts.

A 62-strong Malaysian disaster response team was due to arrive on Saturday, and Prime Minister Najib Razak urged Russian President Vladimir Putin in a phonecall to help them gain access to the site.

Concerns over the site’s vulnerability are high after international observers from the Organisation for Security and Cooperation in Europe were blocked from fully accessing the sites by armed rebels “for their own” safety.

US President Barack Obama blamed Russia for creating the conditions which led to the doomed flight MH17 being shot down, as the disaster further fanned the flames of the worst East-West crisis since the Cold War.

Malaysia Airlines said 283 passengers and 15 crew were aboard the plane — including, at last count, 192 Dutch nationals, 44 Malaysians, 27 Australians and 12 Indonesians. Australia said 28 of its citizens were on board.

Obama cranked up political pressure on Putin as he presented the conclusions of US intelligence analysts about the “unspeakable” carnage.

“Evidence indicates that the plane was shot down by a surface-to-air missile that was launched from an area that is controlled by Russian-backed separatists inside of Ukraine,” Obama said.

“A group of separatists can’t shoot down military transport planes, or, they claim, shoot down fighter jets without sophisticated equipment and sophisticated training, and that is coming from Russia,” Obama said.

Kiev and Moscow have traded blame for the tragedy, with Putin saying Ukraine bore responsibility for the crash for pressing on with its offensive against the rebels.

Ukraine has released recordings of what it said was an intercepted call between an insurgent commander and a Russian intelligence officer as they realized they had shot down a passenger jet.

Comments attributed to a pro-Russian rebel chief suggested his men may have downed the plane by mistake, believing it to be a Ukrainian army transport aircraft.

Pentagon spokesman Rear Admiral John Kirby said: “It strains credulity that (the missile) can be used by separatists without some measure of Russian support and assistance.”

In calls to the leaders of Germany, Britain and Australia, Obama pressed for “a prompt, full, unimpeded and transparent international investigation”, and stressed the need for immediate access to the crash site.

The US leader, who stiffened sanctions on Russia on Wednesday, also prodded Europe to do more to restrain Putin, who he said had the power to rein in separatists but refused to use it.

“I think that this certainly will be a wake-up call for Europe and the world that there are consequences to an escalation of the conflict in eastern Ukraine,” Obama said.

The UN Security Council unanimously demanded a “full, thorough and independent investigation” at the start of a meeting on the Ukraine crisis that saw fraught exchanges between Western countries and Russia.

Tusk and Biden noted that Russia was “supplying weapons and training — including anti-aircraft weapons — to the separatists, with profoundly de-stabilizing consequences,” a White House statement said.

Grief over the tragedy melded with fury as heart-rending stories emerged of the men, women and children aboard the doomed Boeing 777.

Dutch families jetting off to exotic destinations, more than 100 AIDS experts and an Australian family who also lost relatives on Malaysia Airlines flight MH370, which went missing in March, were all among the victims.

Dutch Prime Minister Mark Rutte bristled with anger, pledging to “personally see to it” that those responsible for attacking the plane be brought to justice.

At the other end of the plane’s uncompleted flight path, Najib — embroiled in a Malaysia Airlines disaster for the second time in four months — had a similar warning.

The prime minister — whose step-grandmother was on the ill-fated flight — highlighted the need for an objective, unfettered probe into the crash in a phonecall with Putin.

“I also told Putin that the site should not be tampered (with) before the team begins its investigation,” he was quoted saying by Malaysian national news agency Bernama.

Separatist leaders ruled out a truce to allow the plane probe to go ahead and fierce clashes continued Friday, with local authorities saying 20 civilians were killed in the rebel-held city of Lugansk, some 100 kilometres to the north-east of the crash site.