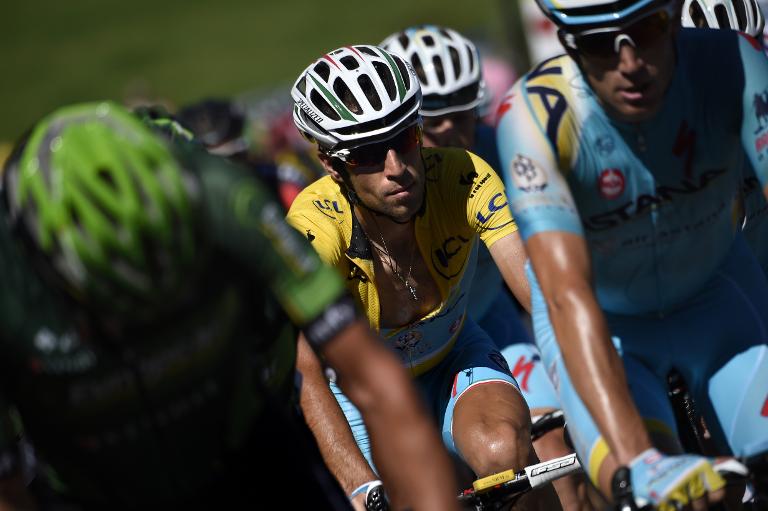 Race leader Vincenzo Nibali insisted he was calm ahead of the first Alpine stage at the Tour de France on Friday.

The Italian gained time on all his remaining rivals in the two uphill finishes on stages eight and 10 and he says he has faith in his Astana team ahead of Friday’s summit finish.

“My rivals will certainly try to attack me but that’s normal,” said the 29-year-old.

“There are two difficult stages (in the Alps). (Friday) the climb is very steep but we’re ready, we’ve got (Michele) Scarponi who will try to stay close to me and we’ll try to control the end of the stage.”

The 197.5km 13th stage has one early third category climb but finishes with a first category ascent and then the uncategorised summit finish.

There are 138km before the 14.1km first category Col de Palaquit climb with an average gradient of 6.1 percent.

What makes that climb particularly difficult is the frequent changes in steepness ranging from 3 percent to 11.7 percent.

The hors category climb to Chamrousse is 18.2km long with a brutal 7.3 percent average but more consistent in its difficulty, although first half is slightly tougher.

Nibali has not ridden the climbs before but says he believes he could even make time gains over the next two days.

However, it is Saturday’s 177km 14th stage from Grenoble to Risoul with two first category climbs and one uncategorised one, the Col d’Izoard — the highest point of this year’s race at 2,360m above sea level — which worries him more.

“I haven’t done reconnaissance at these climbs. The one I fear more is the second stage because the first day you have more energy but the second requires more effort and takes more out of you.

“We will try to manage it with the team, we’ve had good days and we’ll try to control things.

“It won’t be easy for sure, people will attack me but I’ll try to defend the yellow jersey and if I can take some seconds, I will try that.”

Whatever tactics their respective Sky and Movistar teams attempt, Nibali is confident his Astana teammates will be able to cope with it.

“Attacks can happen from a long way out but the Tour de France won’t end (on Friday),” said the Sicilian.

“I’m not afraid. We’ll have to evaluate fatigue and our strength but I’m quite calm.

“I have a team with me that has trained well, we have (Jakob) Fuglsang, (Tanel) Kangert and Scarponi who can give me lot of help in the climbs.”

Thursday’s temperatures topped 30 degrees Celsius while it is expected to get even hotter on Friday, and perhaps Saturday too before storms arrive.

Nibali says he prefers the heat but insists he is comfortable dealing with whatever the Tour throws at him.

“It was a bit tougher Wednesday because the heat hit you straight away (after several cool and rainy stages) whereas Thursday I was a bit more used to it,” he said.

“I’m fine in the heat, I won the Vuelta and that’s always hot.

“I adapt well both to bad and good weather.”

Porte said any rider needs to be ready to pounce on any opportunity to put time into his rivals, but for him it is Saturday’s stage where he thinks he’s more likely to have some success.

“Every day, if you stay at the front there’s your opportunity,” he said.

“The way this race has gone, certainly if you look more towards a stage like Risoul, I know that climb quite well.

“There are opportunities everywhere, somebody’s got to have a bad day somewhere and I think that’s where we’re ready to go.”