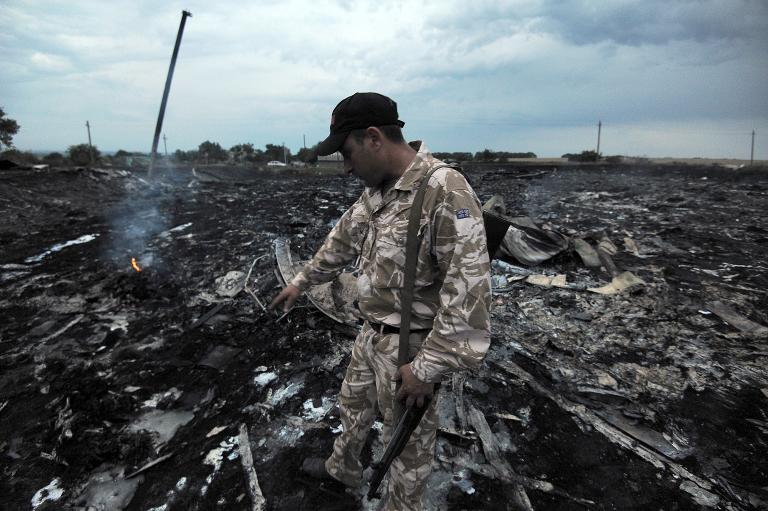 Body parts strewn through kilometres of debris, luggage littered down country roads, smouldering remnants of a passenger plane in a cornfield: the terrible carnage at the east Ukraine crash site of Malaysia Airlines flight MH17.

“These poor people,” says shell-shocked local resident Natalia, standing in front of her home near the epicentre of the devastation.

“Do you think they understood anything about this war in Ukraine? Even we don’t understand it.”

In a nearby field the tail fin of the Boeing-777 painted with the colours of Malaysia Airlines lay in a meadow with some of the baggage and personal items of the 295 people on board littered around.

Dozens of brutally mutilated corpses lie among the debris. The torsos of two passengers remain strapped into the charred remnants of their seats.

In the middle of country lane a severed foot bears witness to the ferocity of the disaster. There are no traces of any survivors.

“I don’t see how anyone could have come through this,” says Oleg, a separatist fighter, adding that he helped collect 13 bodies. “They were in pieces.”

Eyewitnesses told AFP that there was a loud explosion and the plane appeared to disintegrate in mid-air before debris rained down. People in a village some 9 kilometres away reported finding remnants of the plane.

Some it is still aflame and there is a strong smell of kerosene all around.

Her son-in-law Alexander, 43, points at blackened burn marks on the fence around his farm that was scorched by the flaming shards falling from the sky.

Nearby lie a landing gear and a large chunk of the plane’s fuselage.

“The grapevines have also been burnt. We were very, very lucky” to have escaped unharmed, he says.

Up till now the fighting that has rocked eastern Ukraine had not affected their quiet homestead but over the past several days the rumble of fighting has reached a neighbouring district closer to the Russian border and the occasional Ukrainian fighter jet had whooshed overhead.

The first help arrived some 20 minutes after the crash happened but there appeared to be no hope of finding anyone alive.

Two fire fighters stand in a field holding a water hose and seemingly helpless before the scale of the destruction.

“Our bosses need to set up a headquarters here and tell us what we can do and then we will do it,” one of them says despondently.

As night falls over the site, there are neither lights nor frantic recovery operation.

The firefighters are illuminated by the headlamps of their trucks and in the fields lie the victims of the disaster.