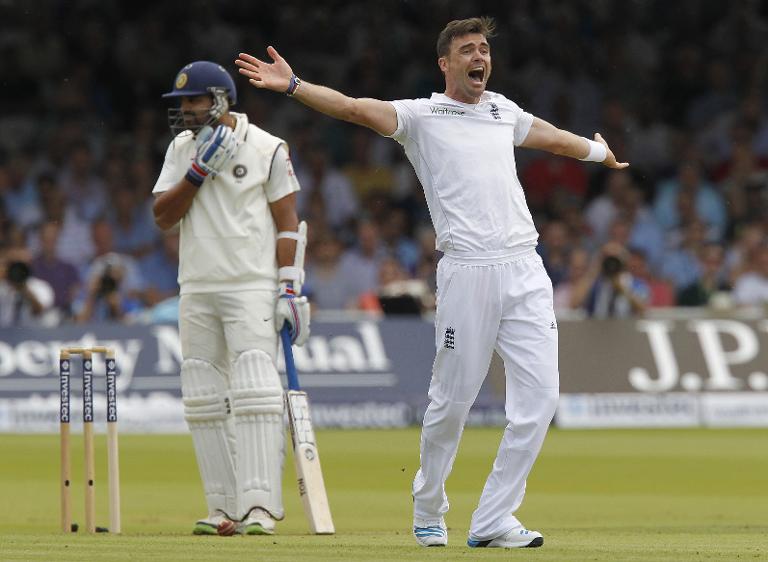 Ajinkya Rahane led India’s recovery with a superb hundred after they collapsed on the first day of the second Test against England at Lord’s on Thursday.

India, after losing the toss on a seaming pitch, were in dire straits at 145 for seven.

But thanks to Rahane’s 103 — his second century in just his seventh Test — and his eighth-wicket stand of 90 with Bhuvneshwar Kumar, India reached stumps on 290 for nine.

“Every hundred is special, be it at Wellington or at Lordâ€™s but yes it is special to do this at Lordâ€™s,” Rahane told reporters.

The 26-year-old, who came in at 86 for three, added: “This wicket was different. Until the end the ball was doing something. It was good to get this hundred on this pitch.”

England seamer James Anderson put the looming possibility of a Test ban behind him by taking four for 55 in 22 overs.

But England, without a win in nine previous Tests, failed to press home their advantage, with wicketkeeper Matt Prior enduring another torrid day as he dropped two catches and conceded 17 byes.

It was not as bad for England as seeing Kumar and Mohammed Shami put on 111 for the tenth wicket during last week’s drawn first Test at Trent Bridge, but it was worrying all the same.

At stumps, Shami was 14 not out and Ishant Sharma 12 not out.

“We were probably a little bit too wide,” admitted England all-rounder Ben Stokes.

“When the ball moves like it did today, you could say we should have bowled fuller.”

Anderson’s performance was just the response England were looking for after they were stunned by India’s decision to charge him on Tuesday under the International Cricket Council’s code of conduct for an altercation with all-rounder Ravindra Jadeja at Trent Bridge.

Wednesday saw England retaliate with a charge against Jadeja and now both players could be banned from matches during the remainder of this five-Test series.

Anderson struck in Thursday’s third over, his second, when a ball that pitched outside leg stump and cut away sharply saw left-hander Shikhar Dhawan caught low down at third slip by Gary Ballance.

Murali Vijay — who made a hundred at Trent Bridge — was dropped on nought by a diving Prior off Stuart Broad.

But he fell for 24 when, aiming legside, he was well caught by Ballance off Liam Plunkett.

Then off the last bell before lunch Prior, who has struggled with Achilles and thigh injuries this season, dropped Virat Kohli off part-time off-spinner Moeen Ali.

However, Kohli had only added five runs to his lunch score of 20 when Prior, diving to his right, held an edge off Anderson.

Before this match, India captain Mahendra Singh Dhoni had spoken of wanting his side to be exposed to typically English conditions after a slow, low, ‘sub-continental’ pitch in Nottingham.

But Dhoni couldn’t pass his own ‘exam’ as he fell for one, edging Broad to Prior as the fast-medium bowler took his 250th Test wicket.

Jadeja’s role in the Anderson flare-up saw him booed by some spectators as he walked out to bat.

Anderson, though, didn’t get the chance to bowl at Jadeja on Thursday, with Ali having the left-hander lbw for three.

Kumar again played more like a batsman than a tailender.

But two overs after England took the new ball, he was bowled for 36 by a Broad delivery that kept low.

Rahane though leg-glanced Anderson for four and next ball drove him straight back over his head for six to go to 89, before a four though covers off the paceman saw him to a 151-ball century, including 15 boundaries and a six.

But three balls later Rahane’s chipped drive off Anderson saw him caught left-handed by the bowler.