Home Uncategorized Pujara is the â€˜Lord(s)â€™ for India! 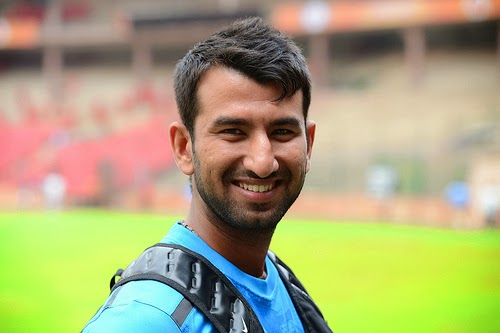 This Test series bears uncanny resemblances to a lot of unpleasant events dug cautiously. The Indians have moved on, but the demons of the past continue to haunt them. Â For instance, even before the second Test between India and England got underway, something unfortunate happened that steered the whole attention away from the action that was supposed to take on field, to the action off it. That itself was an ominous sign of things to come. The Indian foray into the British territory has been veered.

Day 1 of the second Investec Test was a painful reminder of the great Indian collapse that happened in the first Test. Barring Murali Vijay and MS Dhoni, it was only late heroics by the Indian tail-enders that proved to be Indiaâ€™s saving grace. This Test was no different. In fact, not even Murali Vijay and MS Dhoni could save India the blushes. It was Cheteshwar Pujara, who took charge and knocked a century to get India to a respectable total. It was a repeat of sorts for Bhuvaneshwar Kumar and Mohammad Shami, who belted half centuries in the first Test. this time, Shami scored 19 and Kumar scored 36, a much clinical performance compared to the poor show out up by the regular batsmen. The Indians wrapped up their innings at 295, poor by any standards. However, they can only take heart from the fact that at least one their â€˜regular batsmenâ€™ fired. Plus, the tail continued with the trend it has set in the first Test.

Otherwise, it was a lacklustre performance, which the scores reflect. It is only left to be seen whether the Indian bowlers sparkle to make the Indians forget the forgettable performance.

The Indian batsmen need to pull up their socks to ensure that they give their bowlers the cushion that they need, instead of putting them under more pressure. Team Indiaâ€™s got to employ itâ€™s second and third strategies to make sure that the embarrassment stops right there. The key right now is to first get into damage control mode and once that mode is successfully deployed, get cracking all guns blazing to put the hosts in the pressure cooker.