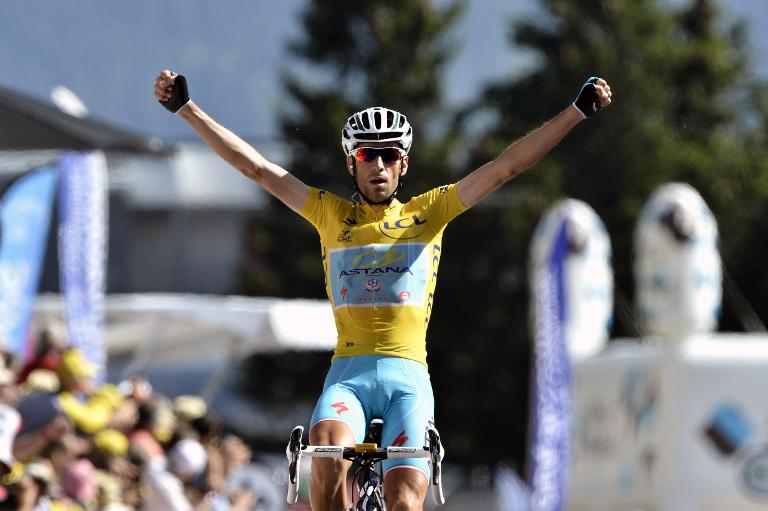 Vincenzo Nibali continued to stamp his mark on the 2014 Tour de France with his third stage victory on Friday to increase his overall lead to more than three minutes.

The Italian champion proved too strong once again for his rivals as he rode away from the field on the final climb to Chamrousse on the 197.5km 13th stage from Saint-Etienne.

Reigning champion Chris Froome and two-time winner Alberto Contador may have crashed out of this Tour already but Nibali said he would have been difficult to beat regardless of their misfortunes.

“I think I’m in the best form of anyone in the Tour,” he said. “I’m sorry we don’t have the duel we hoped for with Froome and Alberto but I got here in great form to be very competitive and my level is very high.”

Australian Richie Porte totally cracked on a scorching hot day in the Alps and came home almost nine minutes behind the Astana leader to drop from second to 16th overall.

Only Spaniard Alejandro Valverde and Frenchman Thibaut Pinot of the contenders could offer any hint of resistance but still came home 50sec and 53sec respectively behind the winner.

Romain Bardet, 23, climbed onto the podium as he came home 1:23 behind Nibali to keep hold of the young rider’s white jersey by just 16sec ahead of French compatriot Pinot.

But the day was all about Nibali, who showed he doesn’t need his team around him as he is simply the strongest rider at the Tour.

Chief lieutenant Jakob Fuglsang had crashed on the descent between the first category Col de Palaquit and the final uncategorised ascent to Chamrousse, while Michele Scaproni was having an off day.

Once Tanel Kangert pulled over before the final 10km, Nibali was shorn of support.

Valverde attacked inside the final 10km but Nibali responded, with Pinot tucking in behind the Italian.

Nibali then launched his own move 6.6km from home and this time Valverde couldn’t respond.

The Sicilian caught Konig and Majka and the three cooperated until Nibali kicked for home with 3km left.

The Astana leader said he hadn’t planned to ride away to a stage victory but once he saw Porte struggling he had concentrated on trying to break Valverde.

“It was very hot but the more you climbed the better it got. Still the heat is the same for everybody,” said the 2010 Vuelta a Espana winner and 2013 Giro d’Italia champion.

“I saw Porte had dropped off already, perhaps because of the heat, so my aim was to gain time on Valverde.

“I accelerated to get up to the two leaders and we were collaborating because we knew there was a long way to go to the finish and tomorrow (Saturday) will be a tough day.

“But there wasn’t great collaboration and I saw that Valverde and Pinot were coming back up to us so I upped the tempo and with that came the victory too.”

With Froome out of the race and Porte now out of contention, Team Sky manager Dave Brailsford said they would have to target stage wins.

“Let’s see how the next few days go, we can look to animate the race as much as we can and let’s go from there,” he said.

“He (Porte) is disappointed and when you’re disappointed it’s not the time to start analysing anything, just support the lad.

“It was just a question then of minimising his losses and keep on going.”

The day had begun with a nine man breakaway before stage eight winner Blel Kadri attacked on the penultimate climb.

Jan Bakelants followed him but both were passed by Alessandro De Marchi.

However, despite opening a gap of almost 4min on the peloton, the Italian was quickly reeled in on the final climb, after which Konig went clear, followed by Majka.

But neither could match Nibali’s final burst.