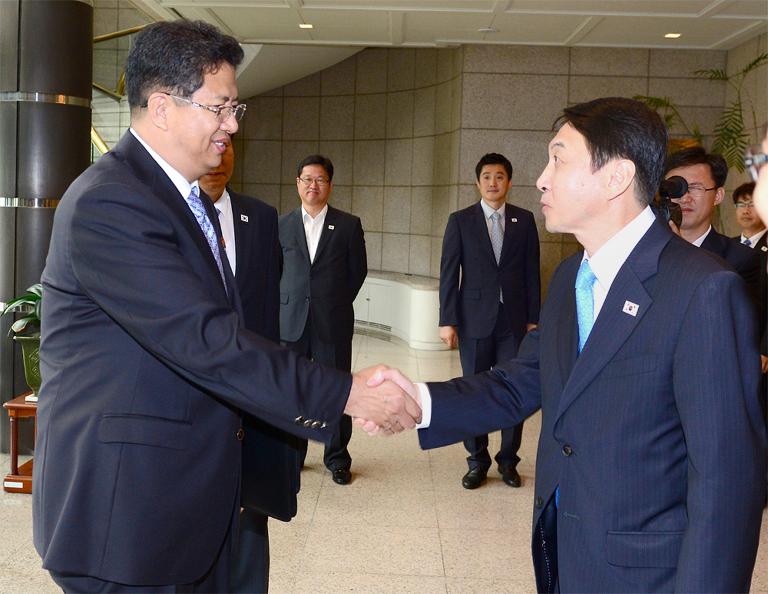 North Korea on Friday threatened to pull out of September’s Asian Games in South Korea, blaming Seoul for the breakdown of talks on Pyongyang’s participation.

The North’s official KCNA news agency said the talks in the border truce village of Panmunjom on Thursday had turned sour following what it suggested was the intervention of the presidential Blue House in Seoul.

After a long delay, the South began the afternoon session with a series of “absurd” demands that overturned everything agreed in the morning, KCNA said.

As well as raising concerns over the number of North Korean athletes and cheerleaders, it sought to place restrictions on the size of the North Korean flag to be displayed at the Asiad, the agency said.

Another apparent point of contention was who would foot the bill for the Northern delegation during its stay in South Korea.

Seoul reportedly wants to break from its tradition of financially supporting visiting sporting delegations from the North, to move into line with international sporting standards.

According to KCNA, the North Korean side saw the South’s attitude as a “deliberate act” to scupper the talks.

“It clarified that if the South side insists on such a defiant attitude, it will fundamentally re-examine its participation in the Games,” it said.

The Asian Games are to be held from September 19 to October 4 in the South Korean port city of Incheon.

The North said in May it would send about 150 athletes, and later that they would be accompanied by a cheering squad.

The Panmunjom meeting was ostensibly aimed at hashing out the practicalities of how the North’s delegation will travel to Incheon and where it will be accommodated.

It was the first meeting between the two sides at Panmunjom for five months, and comes at a time of simmering tensions following an unusually extended series of North Korean rocket and missile tests.

The talks ended with no agreement for another round.

South Korea has yet to comment formally on the outcome of the meeting, but a government official who declined to be identified said Seoul had been mystified by the North’s “unilateral walkout”.

“We never raised any issue with their numbers. We just wanted to know the breakdown of the delegation and the cheerleaders’ group,” the official told reporters.

He confirmed that the South had mentioned following international standards over billing expenses, but stressed that the issue was still open to negotiation.

“North Korea is distorting what happened as a negotiating tactic,” he added.

Because the 1950-53 Korean conflict ended with a ceasefire rather than a peace treaty, the two Koreas technically remain at war.

Official contact is minimal and movement across the heavily-militarised border extremely restricted.

Pyongyang boycotted the 1988 Olympics in Seoul but sent athletes and cheerleaders to the 2002 Asian Games in South Korea’s southern port city of Busan.