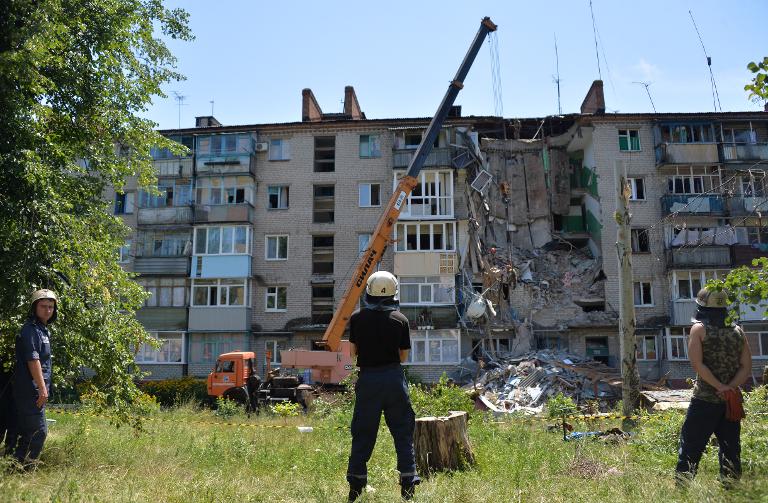 The International Monetary Fund warned Friday that the pro-Russia uprising engulfing Ukraine’s vital industrial east had dealt a “notable” blow that would shrink its economy faster than feared.

The Fund said in its latest review of Kiev’s compliance with terms of a $17.0-billion (12.6-billion-euro) rescue that Ukraine faced new headwinds that were not envisioned when the programme was unveiled in early May.

It said this year’s growth would probably contract by 6.5 rather the 5.0 percent initially forecasted because of revenue collection shortfalls in crisis-hit regions and higher spending on defence.

The IMF added that success of the two-year programme now hinged not only on Kiev’s ability to adopt urgent but unpopular belt-tightening measures but also “crucially on the assumption that the conflict will begin to subside in the coming months.”

“The conflict is putting increasing strain on the program and a number of key elements of the macroeconomic framework have had to be revised,” Nikolay Gueorguiev said in a statement.

“Economic prospects have deteriorated notably, and GDP is now expected to contract by 6.5 percent this year, compared to 5 percent when the programme was adopted,” he said.

“A shortfall in revenue collections in the east, higher security spending, and lower-than-expected debt collection by Naftogaz will cause fiscal and quasi-fiscal deficits and financing needs to rise above the programmed path.”

The IMF review was completed before Europe’s most explosive standoff in decades erupted again on Thursday with the crash of a Malaysian jet that Kiev blamed on separatists who allegedly receive covert shipments of sophisticated Russian arms.

The 298 people who perished on the Amsterdam to Kuala Lumpur flight came from around the world and the catastrophe sparked condemnaton from a host of countries.

Some economists said the development raised the chances of Washington and its European allies unleashing more punitive economic sanctions against Russia.

“In the US and Europe, the readiness to incur short-term economic costs and impose more punitive sanctions on Russia has probably gone up,” Berenberg Bank economist Holger Schmieding added.

President Vladimir Putin has warned that such steps could affect massive investments by global energy giants in Russia’s Siberian and Artic oil and gas fields.

But Ukraine’s bigger concern is that Putin’s anger will translate into restrictions on Ukrainian imports that Moscow had already warned about when Kiev signed an historic EU free trade agreement last month.

Yatsenyuk told a cabinet meeting on Friday that “we must prepare for a practically complete restriction of bilateral trade with Russia.”

He said that if Ukraine lost access to the Russian market it would reduce annual exports by $5 billion — about seven percent of the country’s total.

Russia takes in nearly a quarter of all goods shipped abroad by Ukraine and Yatsenyuk offered no explanation of how he came up with the figure.

“But Russia is not the only market in the world,” the prime minister added. “The government must do everything to help diversify our sales markets over the short term.”

The European Union estimates that the economic portion of the Association Agreement it sealed with Kiev on June 27 would boost Ukrainian exports to the 28-nation bloc by 1.0 billion euros ($1.35 billion) this year.

Dragon Capital investment economist Olena Bilan said that entirely compensating losses in Russian trade by exports to Europe was “impossible because there are contracts that cannot be re-signed very quickly.”

“Some of the goods we export to Russia cannot be sold (at all) because they do not meet EU standards,” she added.