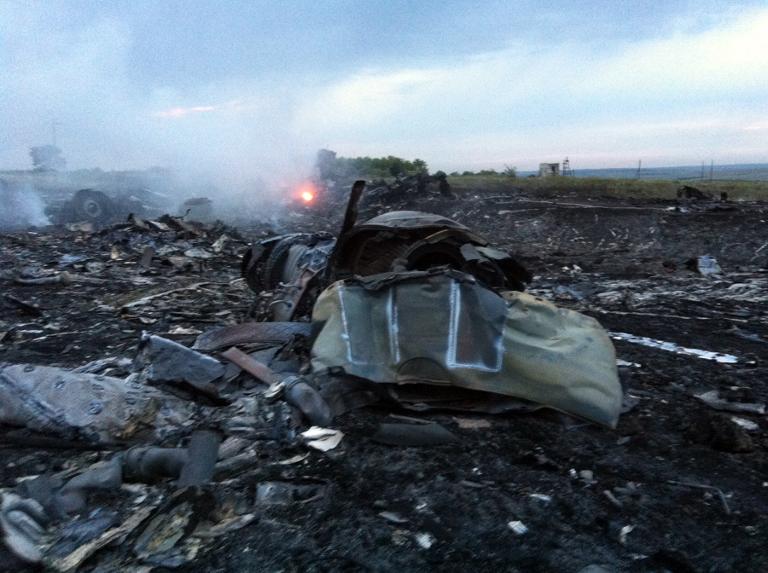 Social media posts by pro-Russian insurgents — most of them hastily removed — suggest the rebels thought they had shot down a Ukrainian army plane before realising in horror that it was in fact a packed Malaysian airliner.

The Twitter and blog messages were immediately publicised by top Kiev officials in their furious information war with the Kremlin for global opinion and the hearts and minds of ethnic Russians caught in the worst East-West crisis since the Cold War.

Confirmation of separatist fighters killing 298 passengers and crew on a flight from Amsterdam to Kuala Lumpur would further complicate Russian President Vladimir Putin’s efforts to paint their uprising as a fight for self-determination.

Russia’s state media avoided any mention of the controversial posts and instead reported militia leaders’ later charges that the Ukrainian air force had shot down the Boeing 777 liner instead.

The rebels first claimed to have downed at least one Ukrainian army plane over the strife-torn eastern rustbelt on late Thursday afternoon.

The VK social networking page of Igor Strelkov — “defence minister” of the self-proclaimed Donetsk People’s Republic — first announced: “We just downed an An-26 near (the town of) Torez.”

“And here is a video confirming that a ‘bird fell’,” said the post.

The website then provides a link identical to that published by Ukrainian media in reports about the Malaysia Airlines jet.

The video shows locals referring to the same coal mine in the region mentioned by Strelkov.

The strongly pro-Kiev Ukrainska Pravda news site later posted an audio recording of what it claimed were the intercepted field communications between rebels and a Russian agent discussing the downing.

“We just downed a plane,” a rebel the recording identifies as Bes (Demon) tells an alleged Russian military intelligency officer.

Another recording shows one alleged fighter reporting from the site of the plane’s remains that it was “100 percent certain this is a civilian aircraft.”

He spits out a Russian expletive when asked whether there were a lot of passengers on board.

The VK post was soon removed — but not before its screen grab was captured and distributed in an English-language press release by the military headquarters of Kiev’s eastern campaign.

The comments attributed to Strelkov did not identify what missile was used to down the craft at what Kiev said was an altitude of 10,000 metres (33,000 feet).

But a message on the official Twitter account of the Donetsk People’s Republic had announced hours earlier that insurgents had seized a series of Russian-made Buk systems capable of soaring to that height.

Ukraine’s pro-Western President Petro Poroshenko quickly called the incident a “terrorist act” and said he “could not exclude” that the plane was shot down by the insurgents.

But Putin said the incident would have never have happened had Poroshenko not ripped up a brief truce agreement and “resumed military activities in southeastern Ukraine”.

Both separatist leaders and Russian defence officials also took pains to implicate Poroshenko’s forces and erase all memories of the insurgents’ initial pronouncements about downing a Ukrainian transport plane.

Rebel Donetsk prime minister Oleksandr Borodai told Russian media that his units did not have equipment capable of reaching the cruising altitude of a Boeing.

Borodai said it was “technically impossible” for the pro-Russian gunmen to have launched such a high-altitude strike.

And the Russian defence ministry argued that it was far more likely for the Ukrainian military to have fired the Buk missile.

“Statements by Kiev officials that such systems… were not used in air attacks arouse serious doubts,” the Russian defence ministry said in a statement.