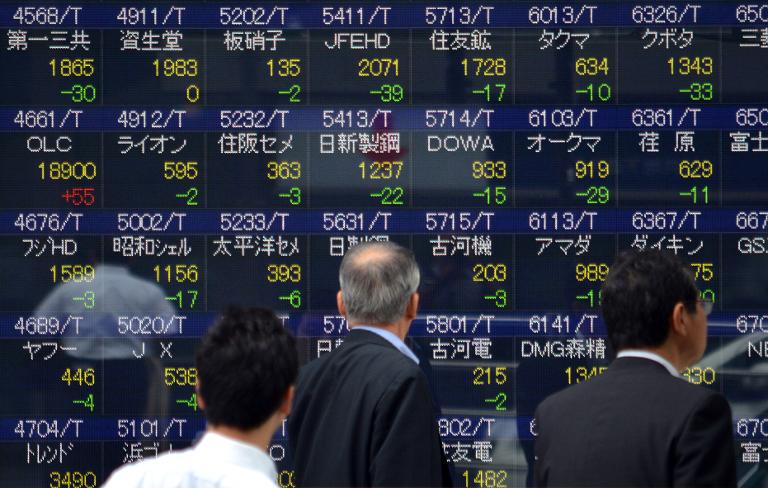 Asian markets were mostly lower on Friday after a Malaysia Airlines jet came down in battle-wracked Ukraine, sparking geopolitical tensions and sending Wall Street tumbling as the US claimed the aircraft had been shot down.

Airline stocks retreated, led by a slump in already under-pressure Malaysia Airlines as the company faced up to its second major disaster in four months following Thursday’s tragedy that killed almost 300 people.

However, Sydney ended slightly higher, adding 0.17 percent to close at 5,531.6 while Shanghai was virtually unchanged in late trade.

Regional markets ended broadly lower — with an Israeli ground offensive in Gaza adding to tensions — but made back some ground from early lows.

MH17 was carrying 298 people from Amsterdam to Kuala Lumpur when it crashed in eastern Ukraine. US Vice President Joe Biden said the jet had been “blown out of the sky”, while officials said it had been hit by a surface-to-air missile.

Ukraine’s government described the incident as a “terrorist act”, while comments attributed to a pro-Russia rebel chief suggested his men may have downed it by mistake, believing it was a Ukrainian army transport plane.

However, Russian President Vladimir Putin said Ukraine bore responsibility for the crash, which came as Ukrainian forces battle pro-Moscow insurgents in the east of the country.

The UN Security Council has called an emergency session on Friday to discuss the disaster.

The downward move across markets was triggered by “nothing but the crash”, said Hirokazu Kabeya, senior strategist at Daiwa Securities.

“We still don’t know details of the incident but need to shun risks,” he said, adding that sentiment would continue to be weighed down as investors watch developments.

“Tensions had been simmering but they came to the fore again… (Investors) can’t be so bold to push ahead with buying at this moment,” he said.

Shares in Malaysia Airlines fell by as much as 17.8 percent on the news, which comes months after Flight MH370 went missing with hundreds on board in a remote part of the Indian Ocean. In afternoon trade shares were 11 percent lower.

Combined with the airline’s perennial losses, the MH370 debacle has pummelled its shares this year — it has lost more than a third of its value since January 1 — and sparked speculation over whether it may be sold off or restructured.

The dollar took a hit Thursday in New York as traders moved into the yen, considered a safe hedge bet during times of political and economic uncertainty.

The yen’s initial advances against the euro also subsided. The single currency bought 137.00 yen in Tokyo afternoon trade after sinking to 136.72 yen earlier in the day.

The dollar bought 3.196 Malaysian ringgit, up from 3.175 ringgit Thursday.

On oil markets, US benchmark West Texas Intermediate for August delivery was up 45 cents in morning trade at $103.64 a barrel and Brent crude for September advanced 34 cents to $108.23.