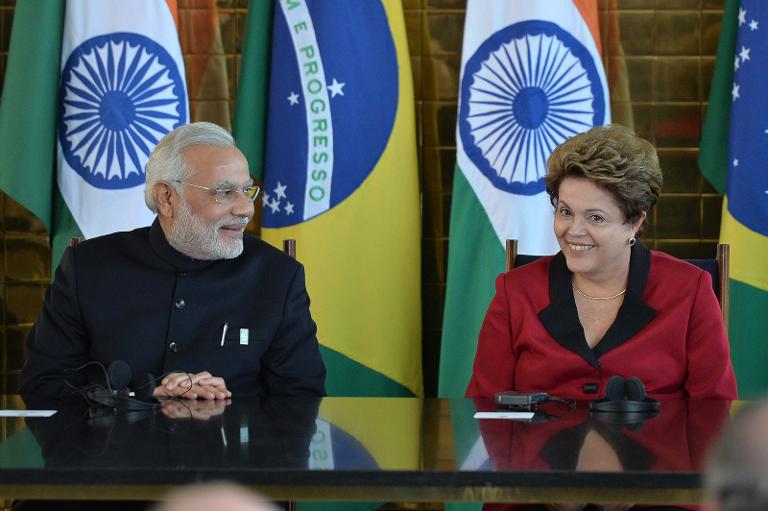 South American presidents hailed the creation of a development bank by the BRICS group of emerging powers as an alternative to the Western-dominated global financial system.

The leaders of Brazil, Russia, India, China and South Africa held unprecedented talks with South American peers in Brasilia a day after the BRICS agreed to launch the bank and an emergency reserve fund.

The leaders also used the occasion to voice support for Argentina in a $1.3-billion debt battle with hedge funds that could sink the country into default by the end of July.

The $50 billon bank, to be based in Shanghai, will fund infrastructure projects in developing countries while the $100 billion reserve fund, dubbed “mini-IMF,” will help the BRICS withstand currency crises.

Brazilian President Dilma Rousseff insisted that the BRICS were not seeking to distance themselves from the Washington-based International Monetary Fund.

“On the contrary, we wish to democratize it and make it as representative as possible,” she told reporters alongside Indian Prime Minister Narendra Modi before the summit.

And IMF Managing Director Christine Lagarde said her staff would be “delighted” to work with the BRICS bloc.

“IMF staff would be delighted to work with the BRICS team dedicated to this project with a view to reinforcing the cooperation among all parts of the international safety net intended to preserve financial stability in the world,” she said in a statement.

Leftist South American leaders praised the creation of the BRICS financial institutions as rivals to the Washington-based World Bank and IMF, which they are pressing to increase voting rights to developing nations.

“The decision to create a BRICS development bank and a reserve fund was welcomed as great news for our entire South American region,” Venezuela’s socialist President Nicolas Maduro said after the closed-door summit.

Maduro proposed an alliance between the new bank and the region’s Bank of the South to build a new financial system free of “speculative financial capital that loots our economies.”

“I am certain that the New Development Bank will end neo-liberal policies and neo-colonialism,” he said.

Argentine President Cristina Kirchner used the occasion to rally neighbors behind Buenos Aires as it negotiates with hedge funds to resolve the debt dispute after her country lost a US court battle.

“We believe we must put an end to this international pillaging in finance that they are trying to do against Argentina, and that they will certainly try to do against other countries,” Kirchner said.

A senior Brazilian official, speaking on condition of anonymity, said leaders voiced concern that Argentina’s situation could compromise debt negotiations of other countries in the future.

“The Argentine case and the way it has been dealt with is an irrational, unheard of situation, and here every country expressed its support for Argentina and a practical solution to this problem caused by a New York judge,” said Colombia’s center-right president, Juan Manuel Santos.

Rousseff has left open the possibility of using the new BRICS financial institutions to aid Argentina if it asks.

It could take two years, however, for the institutions to become operational because they have to be ratified by the legislatures of each BRICS nation, Brazilian officials say.

After Wednesday’s talks, Chinese President Xi Jinping will spend one more day in Brazil to launch a China-Latin America forum, which Cuban President Raul Castro is expected to attend.

The meetings represent a new push by Beijing to gain more clout in a resource-rich region long seen as America’s backyard.

“China is willing to combine efforts with Brazil and other countries in the region to become good friends and allies in a shared destiny, and walk in sync,” Xi said in a speech to Brazil’s Congress.

For Russian President Vladimir Putin, the talks gave him a platform following his country’s exclusion from the G8 group of industrialized nations over Moscow’s annexation of Crimea from Ukraine.

But as the summit ended, the United States and European Union tightened sanctions against Moscow, prompting Putin to warn they were driving Russian-US ties “toward a dead-end.”