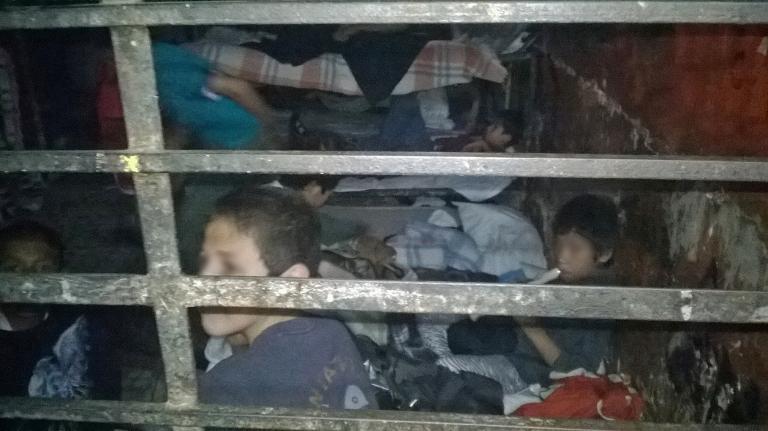 Parents of some of the 458 children rescued from a squalid shelter in western Mexico told horror stories after authorities raided it over alleged sexual assaults and other abuses.

Seeking to get their children back, families from around the country gathered at the “La Gran Familia” (The Big Family) charitable shelter, where the children were still kept under authorities’ care after police arrested the facility’s director, Rosa del Carmen Verduzco, and eight employees.

Lucia Carranza said she “ran out the door” when she heard the news, anxious to see her five-year-old son after only being allowed three visits a year since handing him over to the shelter in the town of Zamora as a young, impoverished day worker.

Carranza, now 25 and living in the nearby town of Tanhuato, told AFP she had been trying to get him back ever since.

“We looked for lawyers but everyone told me it was impossible to do anything against her (Verduzco),” she said.

Police found 596 people, including 138 adults, living amid rats and insects when they raided the home Tuesday after complaints of abuse and kidnapping.

Early investigations indicate Verduzco and her staff inflicted “a variety of physical and psychological abuse” on the residents, said Tomas Zeron de Lucio, an investigator at the attorney general’s office.

The children were forced to beg in the street, sleep on the floor and eat unfit food, he told journalists.

Some residents were also sexually abused.

Maria Ampudia, a children’s rights activist who entered the house with a clean-up brigade, said the beds were infested with cockroaches and rats.

The children “hid potatoes there because they didn’t know when they were going to eat,” she told TV network Milenio.

As the story made headlines worldwide, Verduzco was taken to a local hospital for stress in the custody of the authorities, a clinic director told AFP.

Locals described her as a respected, and sometimes feared, figure in Zamora, a town of 186,000 people about a 90-minute drive from Morelia, the capital of Michoacan state.

The shelter was a regular stop on the campaign trail for local and state politicians in Michoacan.

The shelter’s Facebook page shows Verduzco with former president Felipe Calderon and a former state governor, along with colorful images of children playing musical instruments, marching in a parade and riding on a toy train.

“Inside this home Mama Rosa — or the ‘Boss,’ as everyone in Zamora calls her — provides them education… as well as different activities such as art, fashion workshops, metalworking, bricklaying and music,” it says.

Some family members said Verduzco’s political influence had deterred them from fighting to get their children back.

“At the Michoacan prosecutor’s office, they just told me it was impossible to do anything against that lady,” Avigail Martinez, who had come to bring home her son, told AFP.

La Gran Familia was founded in 1947, according to its Facebook page, and houses residents ranging from newborns to adults over the age of 40.

The rescued children included six babies, who officials said had been born at the home and registered as the director’s own.

The shelter itself says on Facebook that the director has personally adopted all the resident children, who share the last name Verduzco.

One former resident, Bertha Saucedo, told Foro TV that Verduzco had forced her to give up her daughter, who has Down’s syndrome, after she gave birth at the shelter.

“They took my daughter away from me when she was three months old. When she was six years old, I started coming to see her and she (Verduzco) never let me see her because she had Down’s syndrome and if I didn’t pay her she was never going to give her back,” Saucedo said.

“I didn’t file a complaint because I was afraid they would treat her badly, hit her and take her food away.”

Authorities did not explain how the adults at the facility had been held against their will.

The shelter’s Facebook page can be viewed at facebook.com/dianix988/info.